A Multi-Season Sweater + All the Books I’ve Recently Finished 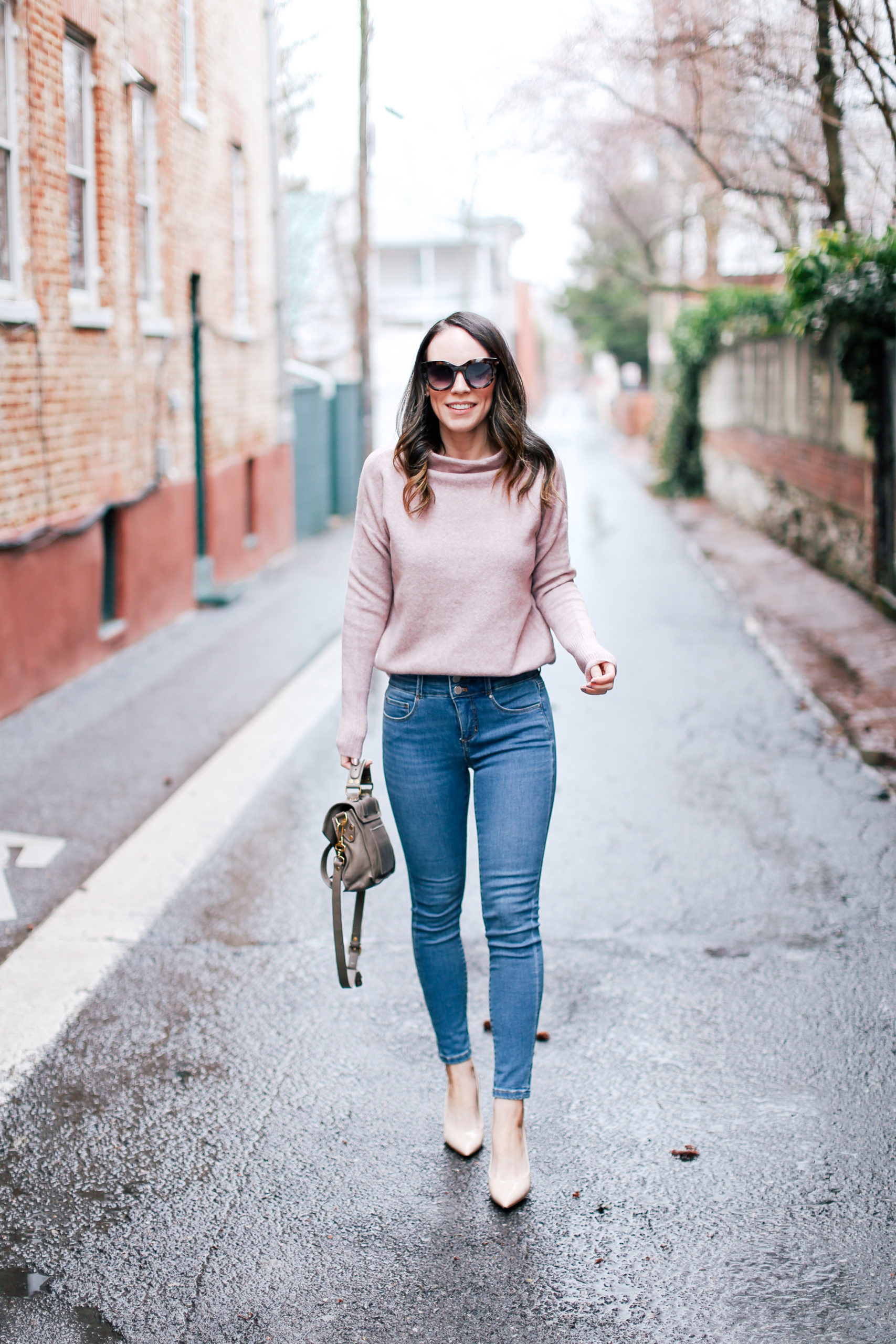 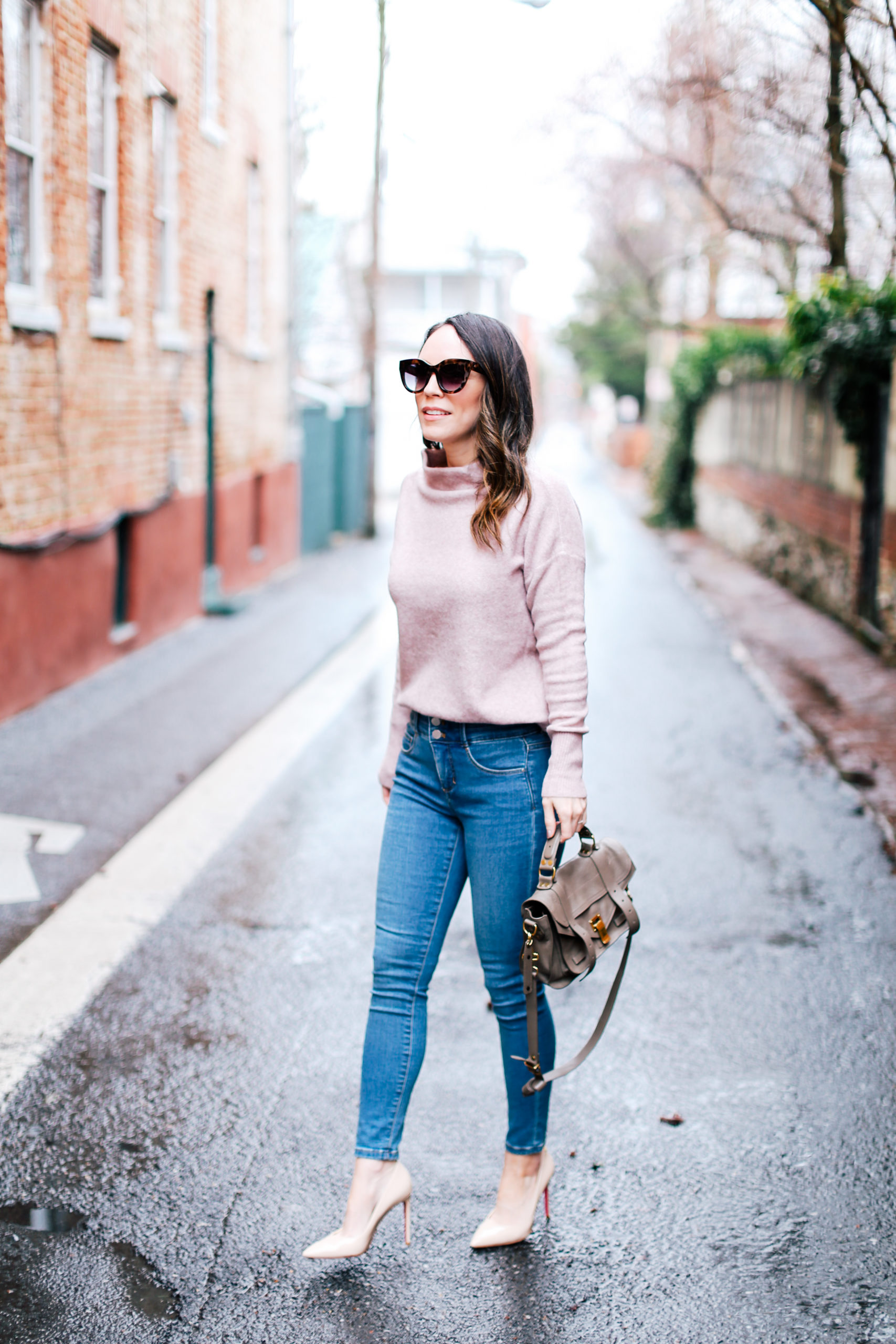 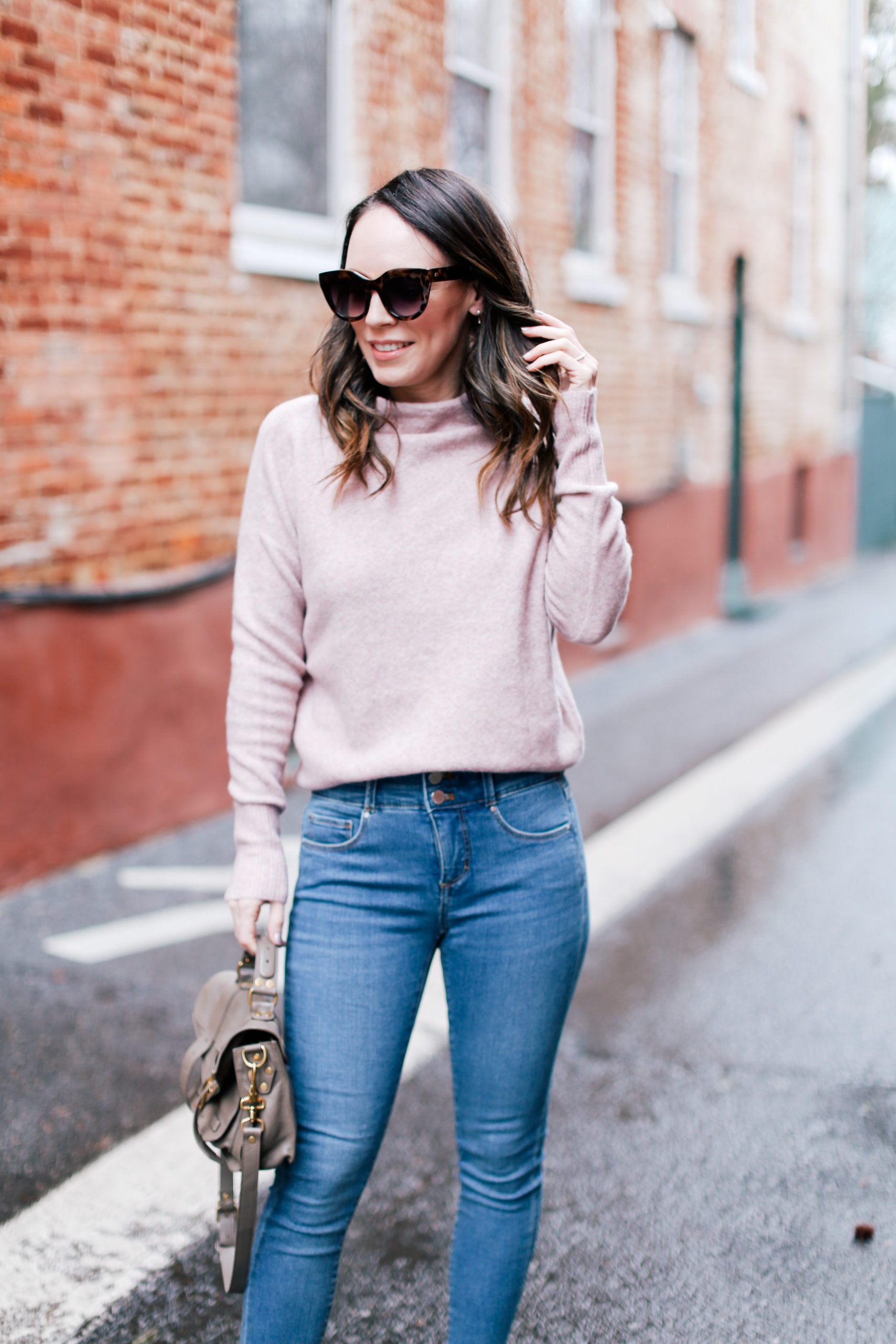 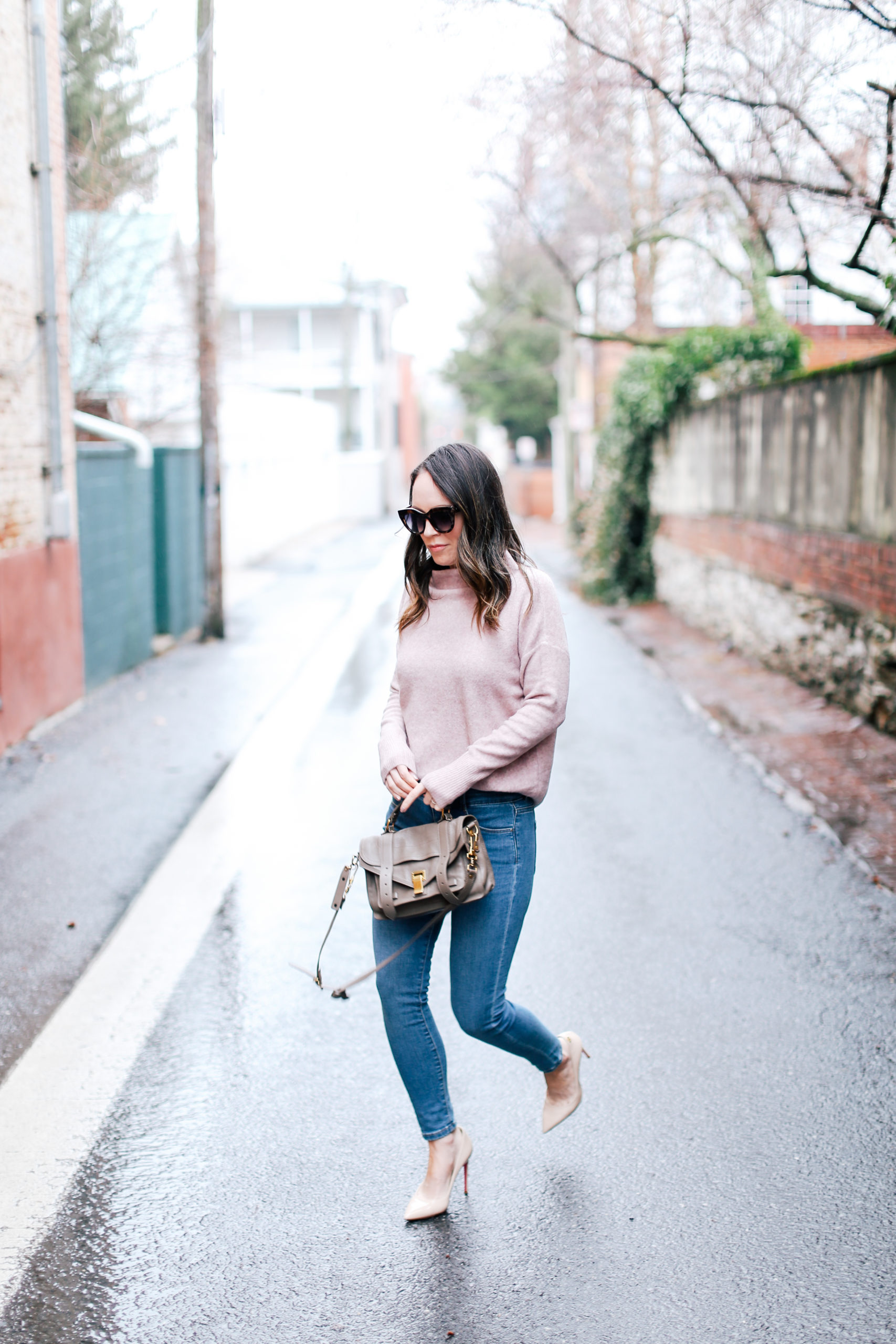 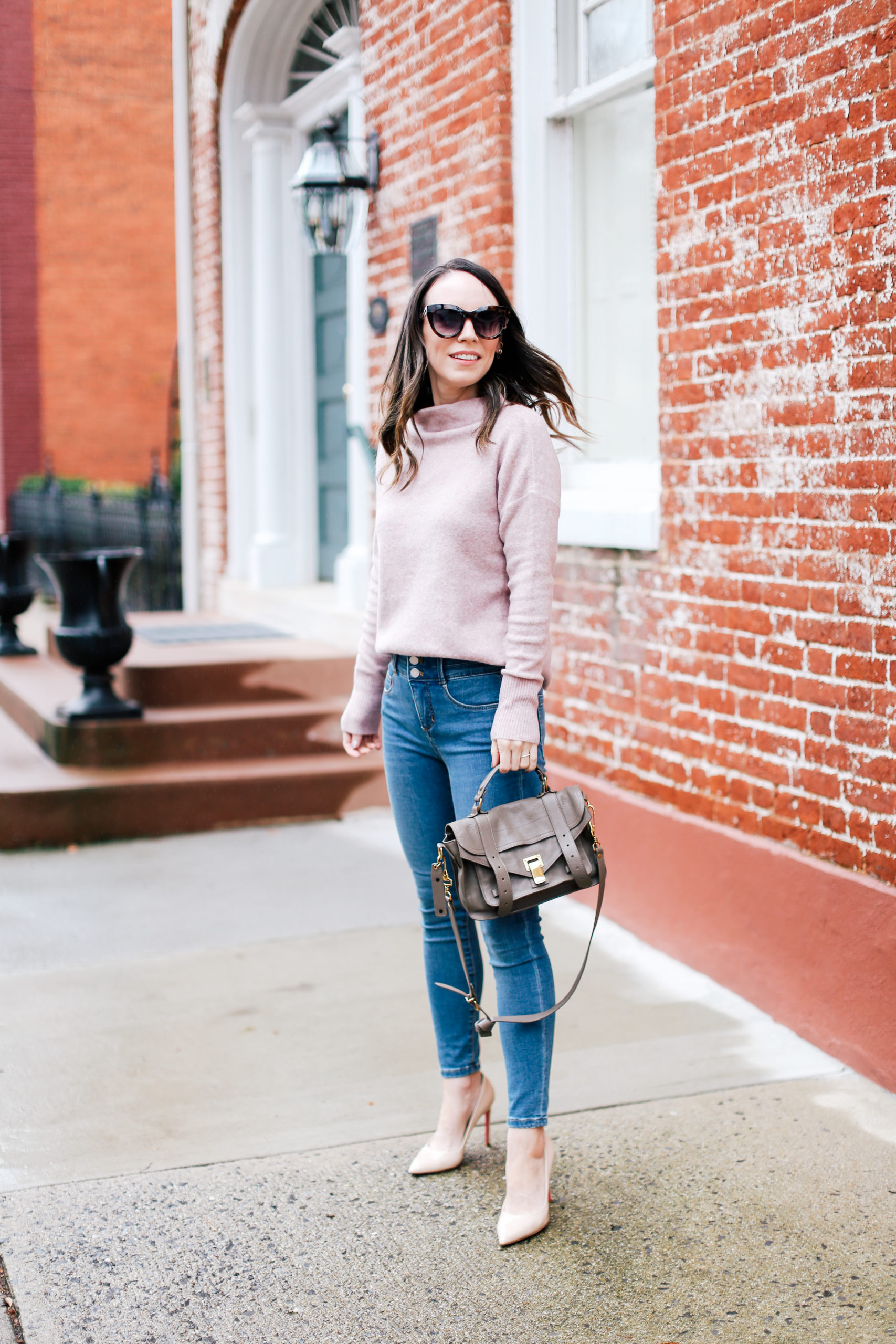 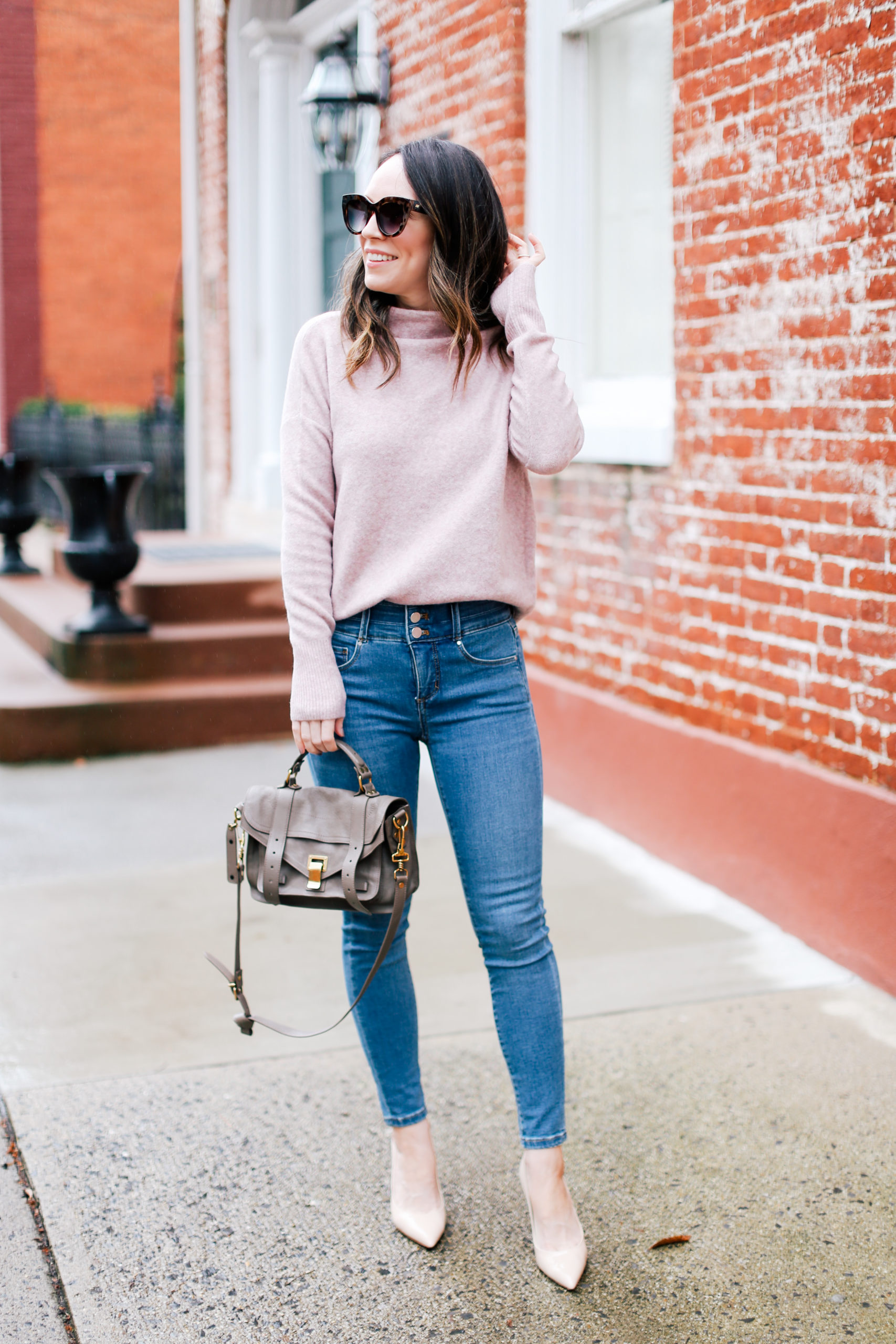 Today’s post is a two in one – both an outfit post and all the books I’ve recently finished. This look is perfect for the in-between weather that we have been having. Not warm enough for a t-shirt, but not cold enough for coat. This lightweight sweater is much more comfortable than I anticipated and is the perfect transition piece. The wide mock neck is so unique and I love the blush rose color for spring. It would also work with shorts and sandals during breezy summer nights and then will be a great staple when fall rolls around.

Moving on to my book reviews! I got through so many books this past month so this post is a bit of a long one. And I am also continuing my ratings system after many of you asked me to do this with my reviews. Here is a look at all the books I’ve recently finished:

1. A Woman is No Man – I absolutely LOVED this book but my only criticism is the ending left me feeling a bit confused and frustrated. There is so much emotion and intensity in the story and it takes place both in the early 90’s and 2008, bouncing back and forth between the two time periods (effortlessly I may add – it’s easy to follow along). Isra’s Palestinian family arranges a marriage for her to a suitor from the United States and she hopes that this new life will bring with it more freedom than she has as a woman in Palestine. She lives with her new husband and his family in Brooklyn, but life isn’t much different from what she experienced at home. Isra is forced to cook, clean, have children immediately and isn’t allowed to leave the home. Fast forward nearly 40 years and her oldest daughter Deya is struggling with the realization that she may be facing the same fate. Unfortunately her mother, Isra and her father, Adam are no longer living and she fights against the rules and traditions being placed on her by her grandmother and culture. She struggles to find out the truth about her parents and why they are dead, and how she can avoid a life of sorrow and abuse that she suspects her mother had to endure. Minus the ending, this book was amazing. Rating: 9.5

2. Still Lives – This was the most recent book I finished and I wanted it to be better than it was. It had all the characteristics of a book I would like, but the author is very verbose in much of the book and it weighed down the story. I found myself drifting off while listening because the dialogue and descriptions were so extensive and often unneeded. It’s a murder mystery about a famous artist, Kim Lord, who goes missing the night of her gallery exhibition. Her work is very controversial and morbid – self-portraits depicting herself as famous murdered women. The museum editor is the ex-girlfriend of Kim Lord’s new boyfriend and finds herself pulled into this mystery because of her connection to the boyfriend. It’s interesting and I did finish the whole book but it dragged on in parts which definitely brought down my rating of it. Rating: 7

3. More Than Words – Nina Gregory is the daughter of the owner of the famous Gregory Hotels in NYC and has grown up in a life of unbelievable privilege. She has always been very close to her father and followed his path for her rather than truly doing what she wants to do. Nina’s father falls ill and passes away, leaving the Gregory Hotel empire for her to lead. But shortly after his death, Nina discovers a dark secret her father was keeping that completely changes her life and her whole impression of her father. Nina must decide if she will continue her father’s legacy or make her own. I liked this book and it kept my attention, but wasn’t as captivating as I felt it could be. Rating: 7.5

4. Tell Me Lies – Ugh, this book made me so frustrated because I couldn’t stand some of the characters but to be honest that is what kept me completely engrossed and I couldn’t put it down! Lucy leaves her east coast life behind to attend college in California and start a fresh new life away from a strained relationship with her mother. She quickly makes friends with a group of girls and they do everything together. During one of their nights out, Lucy meets Stephen DeMarco and falls instantly for his charm and charisma. The story alternates between Lucy’s perspective and Stephen’s, sharing the complicated and eventually toxic relationship they have which lasts for years. Once she graduates from college, Lucy hopes that she can remove herself from this hurtful dynamic that she has with Stephen and perhaps try and mend the relationship with her mother. Sadly Stephen’s hold keeps her entangled in his manipulative web and begins to slowly ruin her life.  Rating: 9

5. The Kept Woman – It took me a few chapters to get into this one, but after that it was a good and easy mystery read. Will Trent is an investigator called to an abandoned warehouse to look into the death of an ex-cop whose body was found in the warehouse. The circumstances surrounding the murder seem to point to his ex-wife which complicates matter even further. Definitely an easy read that you can get through quickly. Rating: 8

6. Regretting You – I am a huge Colleen Hoover fan so this was an instant love for me. Clara and her mother Morgan have a complicated relationship, strained even further by the recent death of her father. As more begins to come out about the circumstances surrounding his death, the family is even more devastated by a double life that he seemed to have been living. Clara seeks solace in a new friendship with a boy that her father initially did not approve of, but now that he is gone she finds herself drawn to this boy even more. Surprisingly he is able to help Clara grieve and ultimately heal her relationship with her mother as time goes on. If you love Colleen Hoover novels, I know you will enjoy this. Rating: 9

7. You Think It, I’ll Say It – I don’t know how to even describe this book because it was so confusing to me. It’s 10 different characters and stories all independent of each other, so it felt very disjointed and I had a hard time following the plots. I have no idea how it received so many accolades because I found it just awful to read. Rating: 2

8. Without Merit – Another Colleen Hoover novel and though I didn’t love it as much as some of her others, I still really enjoyed the story. Merit has a large family with a very unconventional living situation. They live in a repurposed church with her father, stepmother and siblings. Her birth mother lives in the basement of their home which creates an unusual dynamic within the family. Merit feels disconnected from her family because of a incident in the past that left her traumatized, and soon learns another secret that creates more confusion and distrust. She confides in a close friend that is staying with the family and he helps her come to terms with the lies and trauma she has been holding on to. Most of the book takes place in the home but the complicated family dynamics and events that occur make it a very interesting read. Rating: 8.5

9. The Family Upstairs – There are quite a few characters in this book so it can be confusing to follow at times, but once I got into the story I really became engrossed. Libby Jones became an orphan at 6 months old and doesn’t know much about her birth parents. At 25, she inherits a large home in a posh neighborhood in London and begins to uncover the truth about her past and parents. It’s a bit of an odd story and can be difficult to follow at times, but it did keep my attention because I wanted to know the full story. Rating: 8

10. American Predator – As a lover of true crime podcasts and documentaries, I was intrigued to read this true story of one of America’s most notorious serial killers. Israel Keyes was a single father living in Alaska who managed to fly under the radar of the FBI and law enforcement for more than 10 years committing heinous crimes throughout the United States. He was meticulous and calculated in his movements and it took law enforcement years of interviewing him to even uncover the extent and details of all his crimes. Definitely an interesting read! Rating: 9 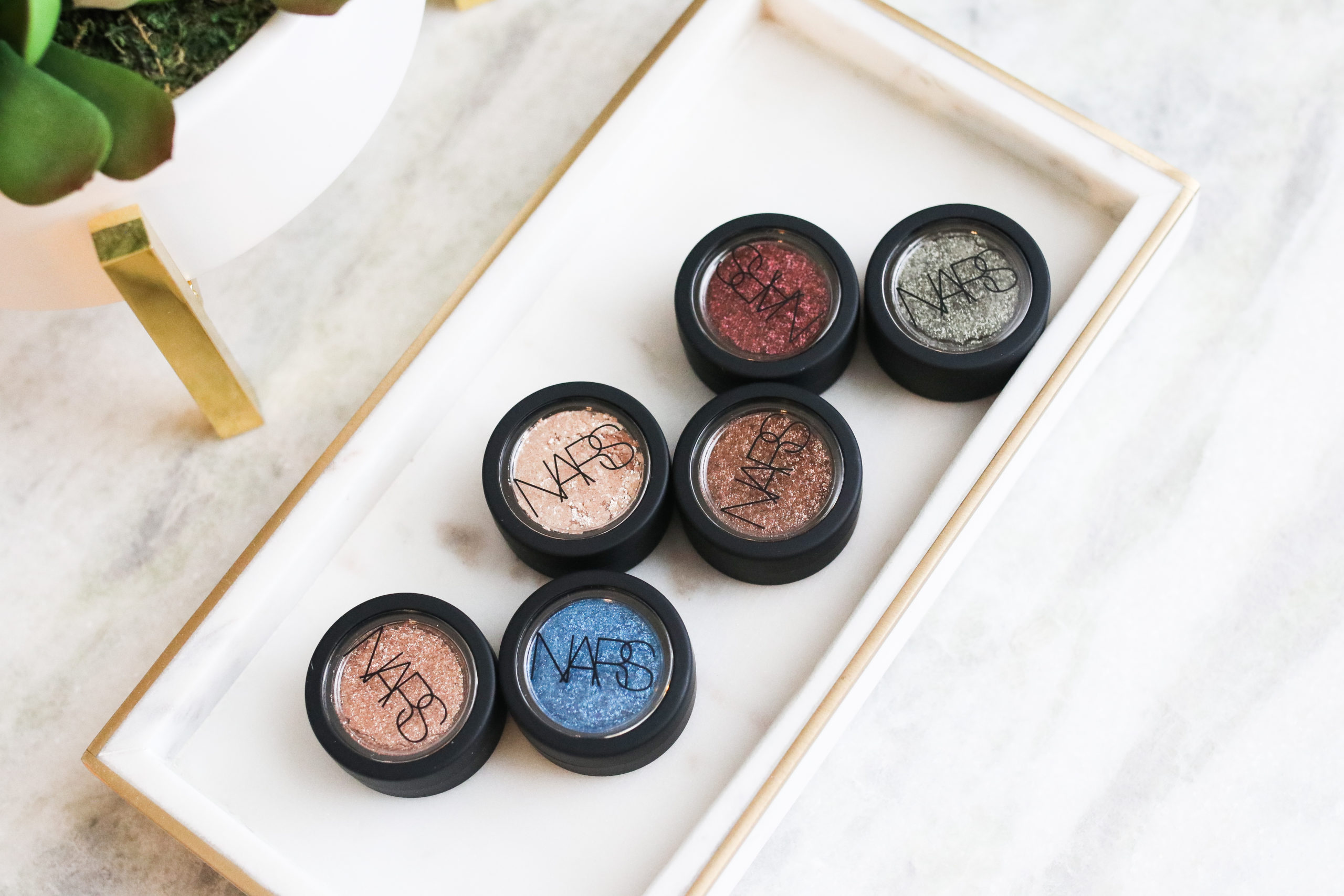 NARS Powerchrome Loose Eye Pigments with Swatches Of Every Shade 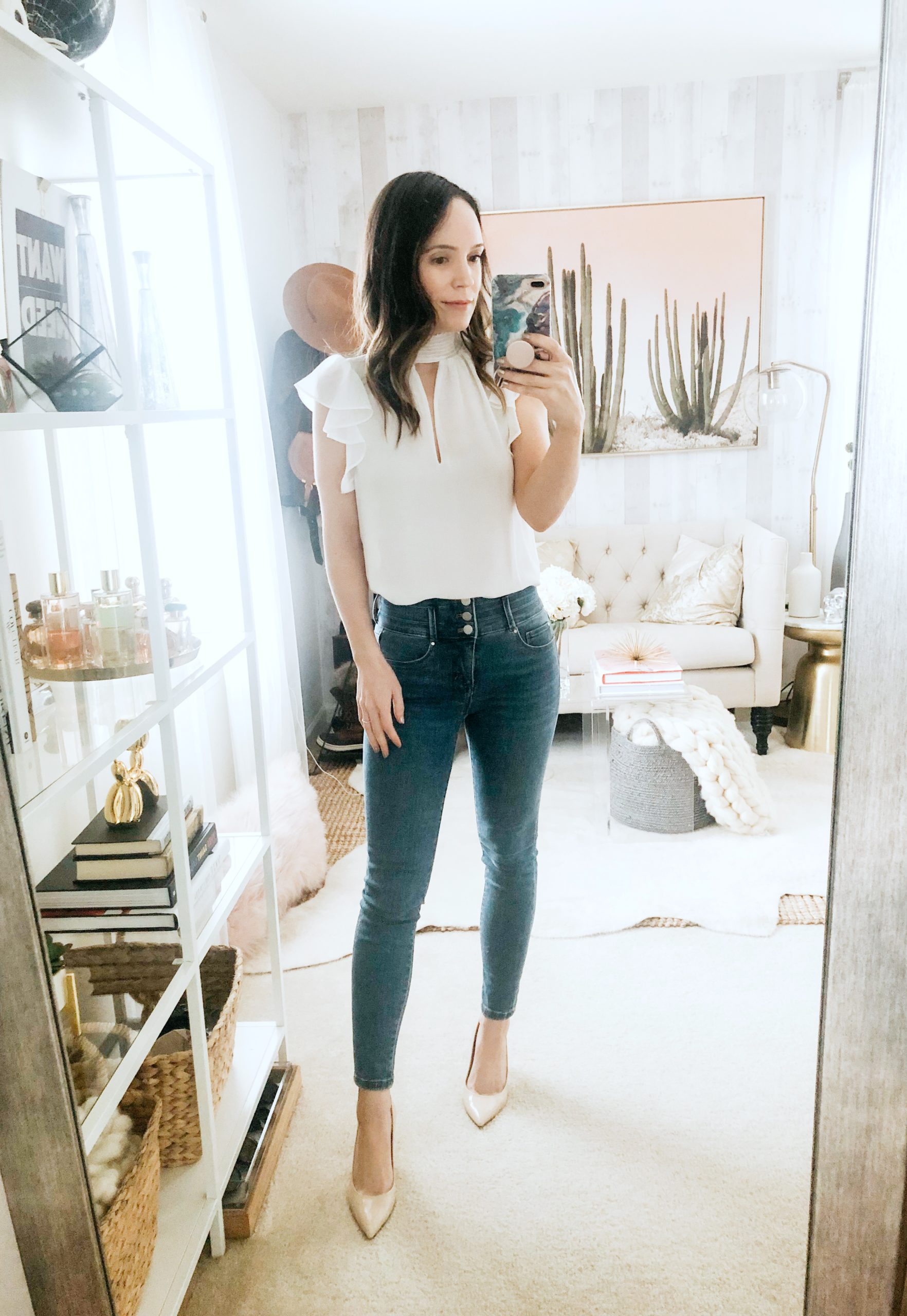 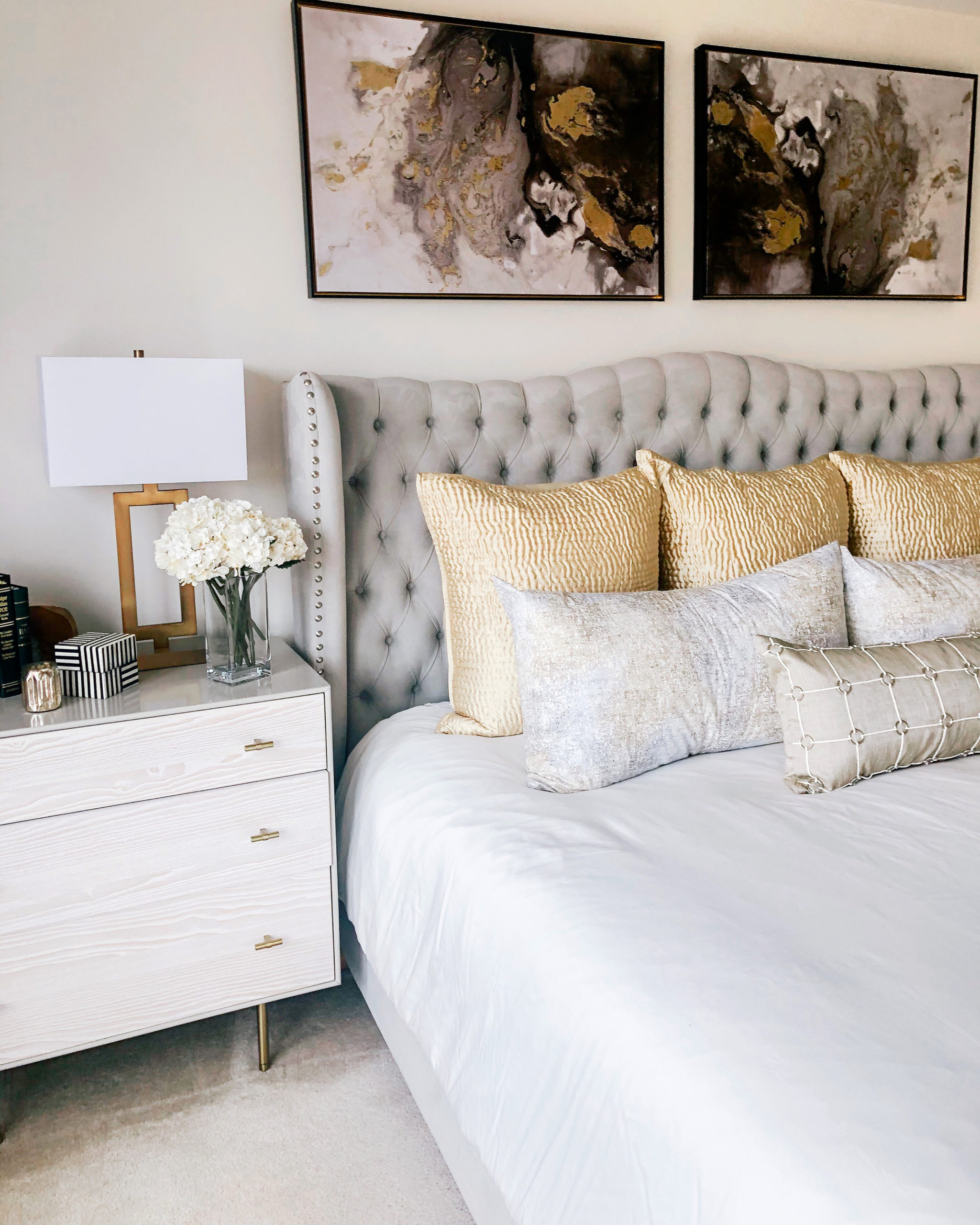 I’m sharing all the top selling items from February in today’s post. I love hydrangeas and these faux ones are so good and look very real. They 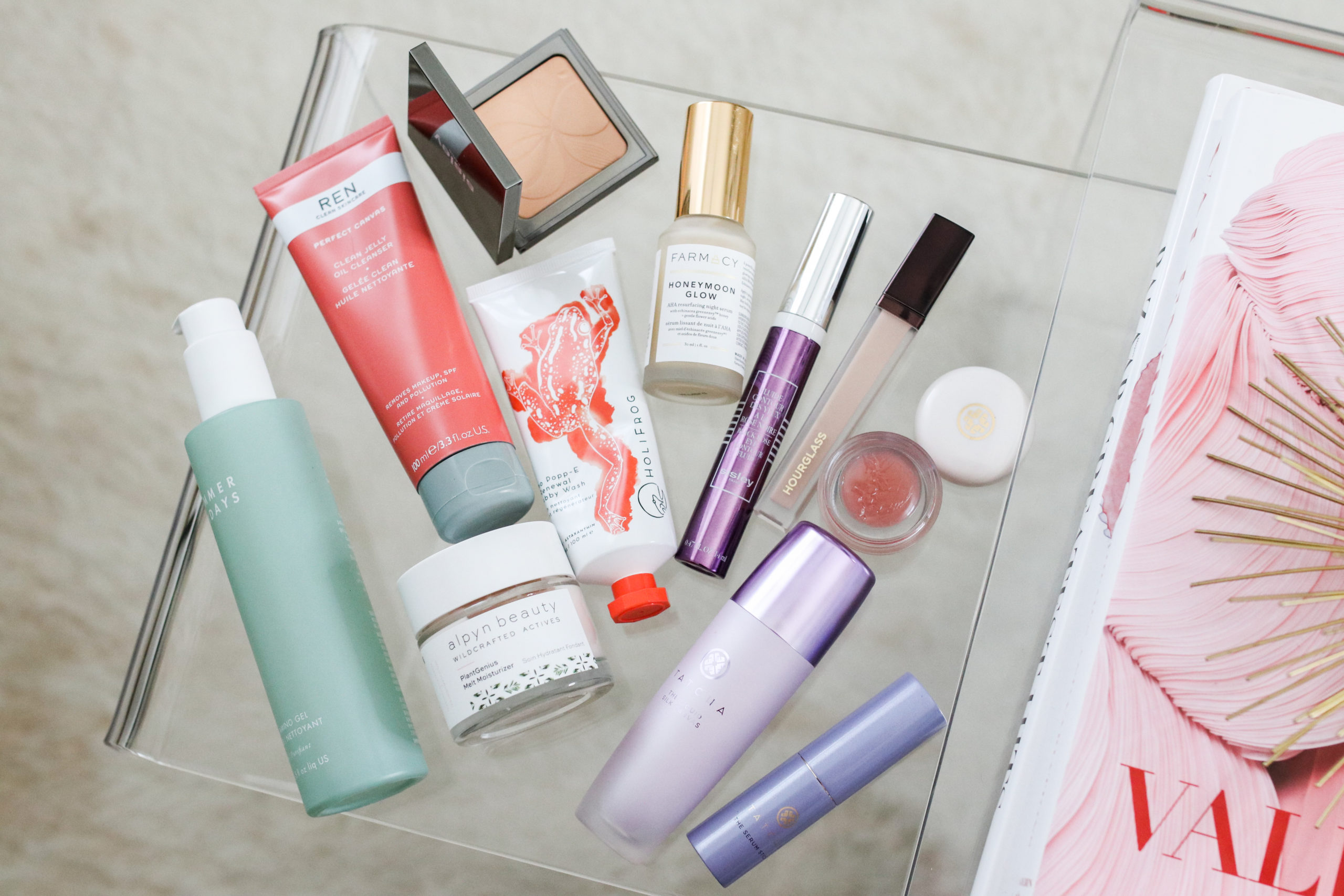 Sharing all my February faves + all the products I’ll be testing out in the coming weeks in today’s video! Don’t forget to subscribe to my channel!