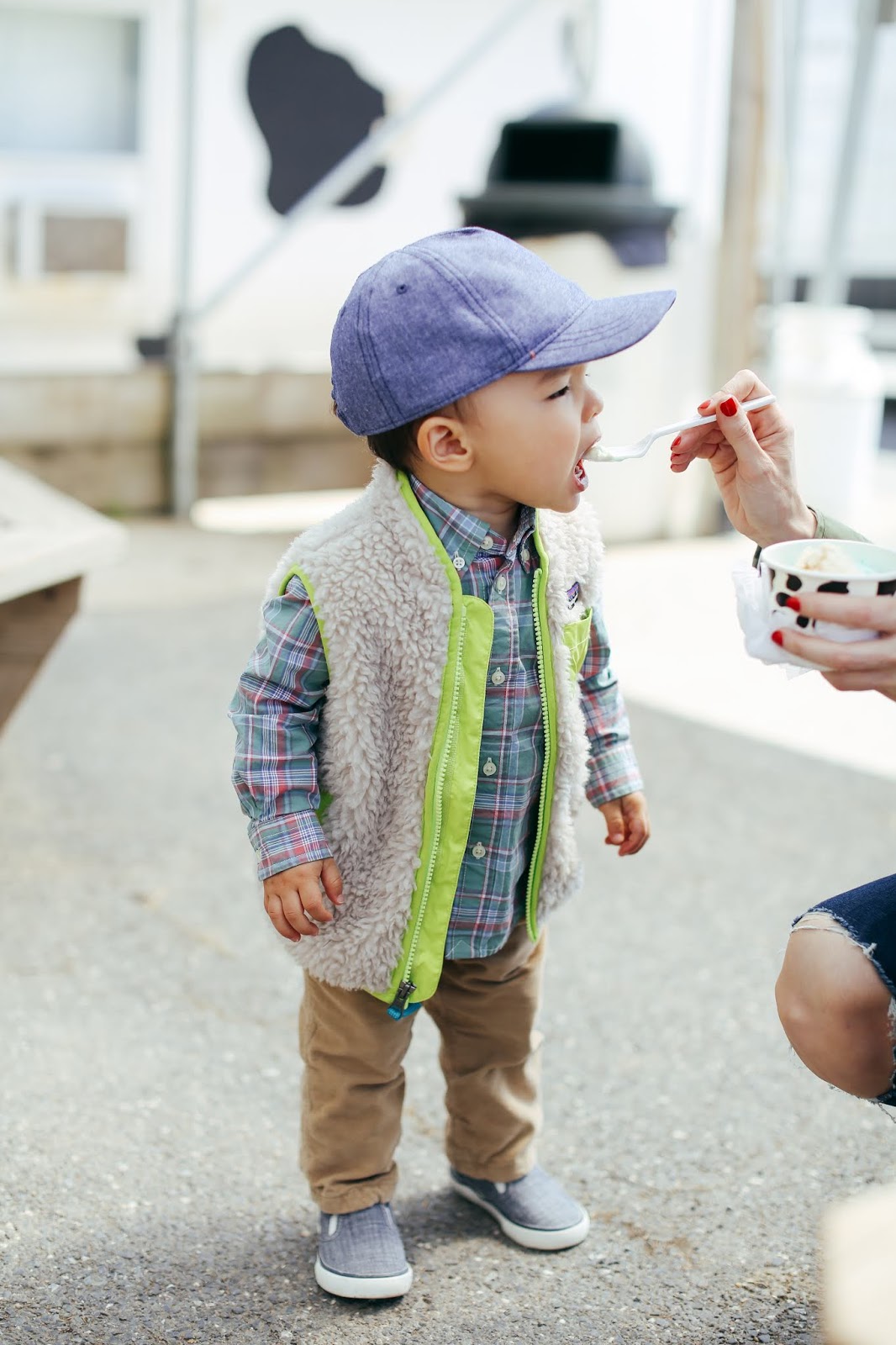 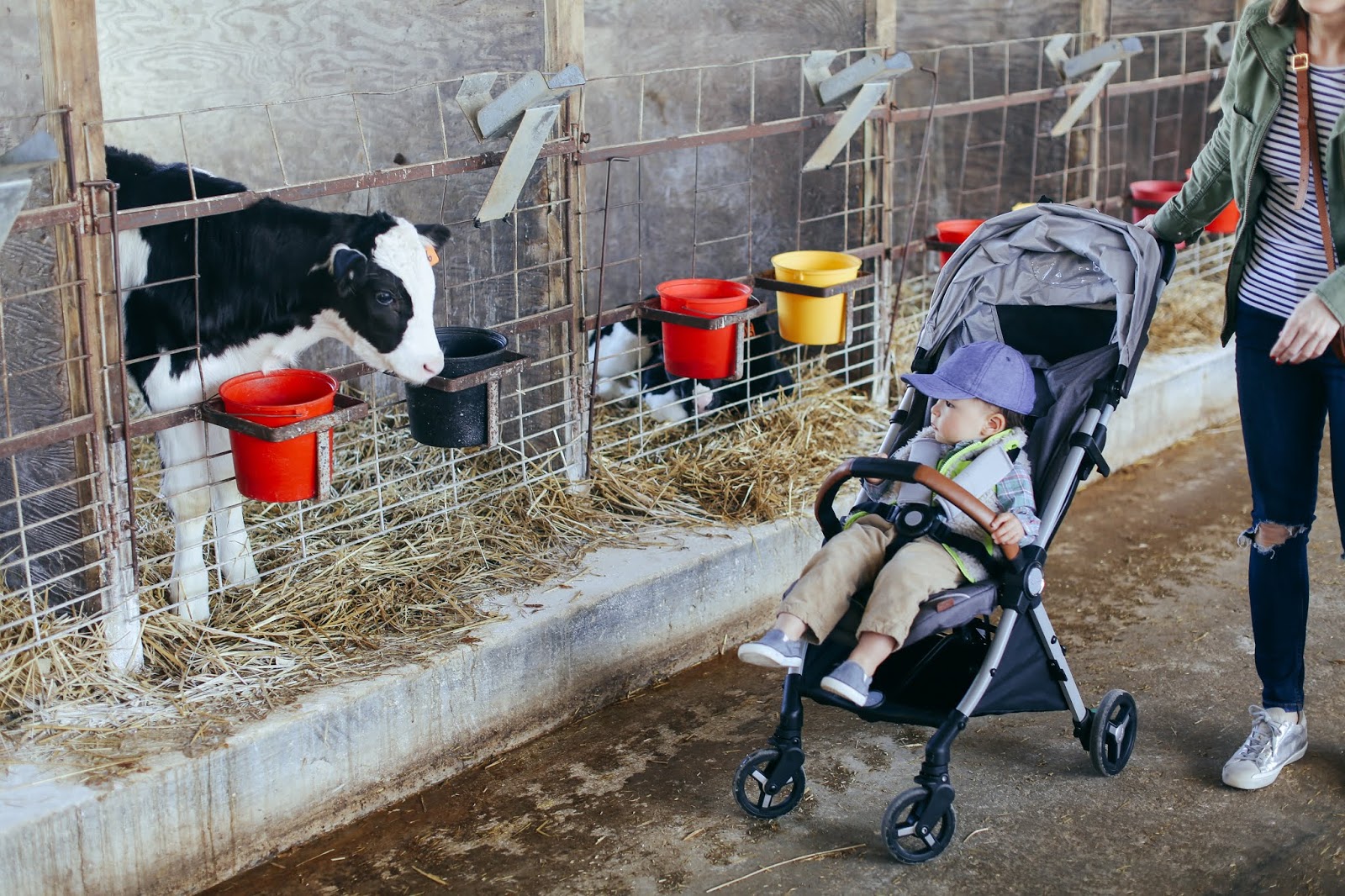 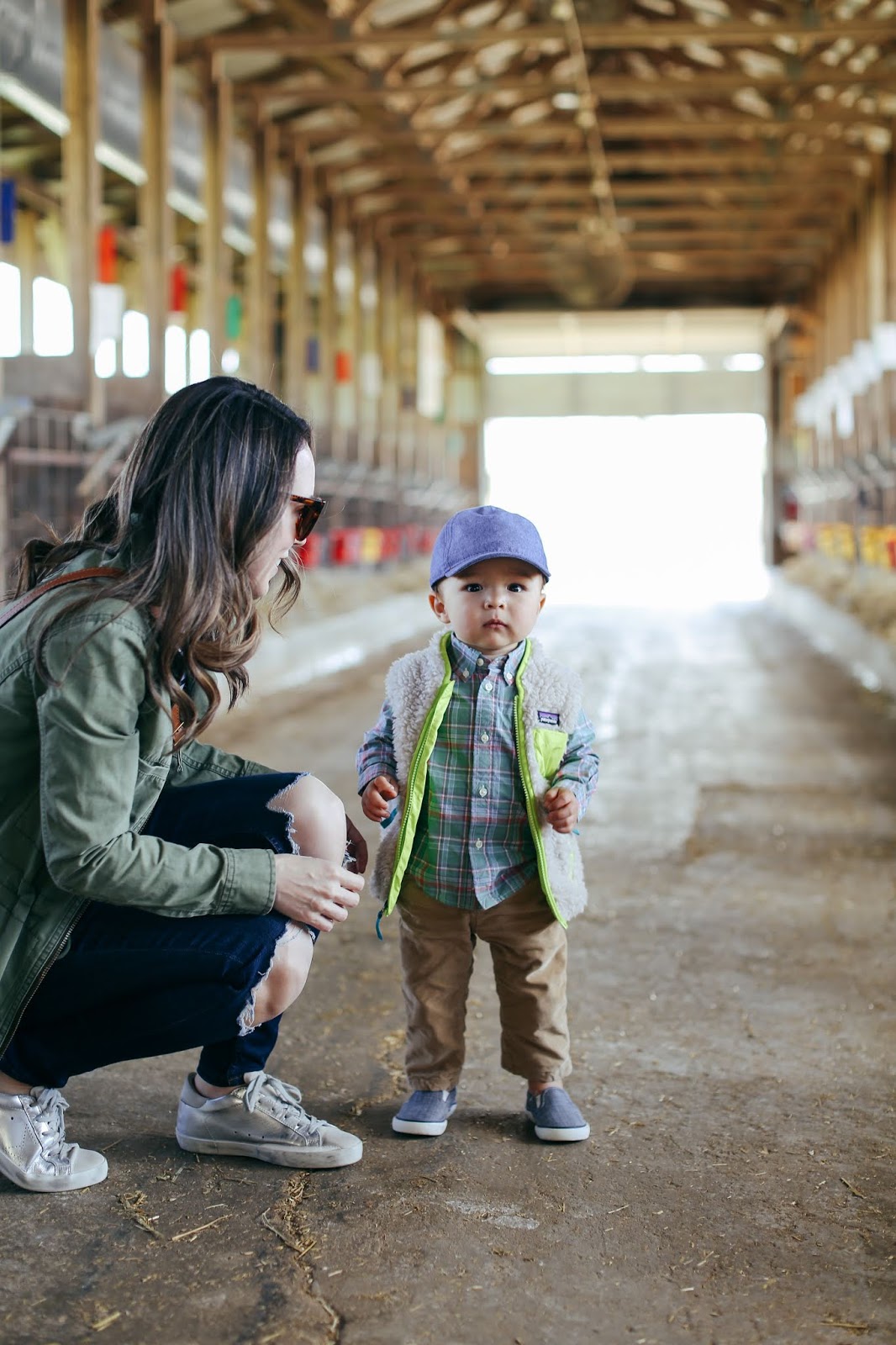 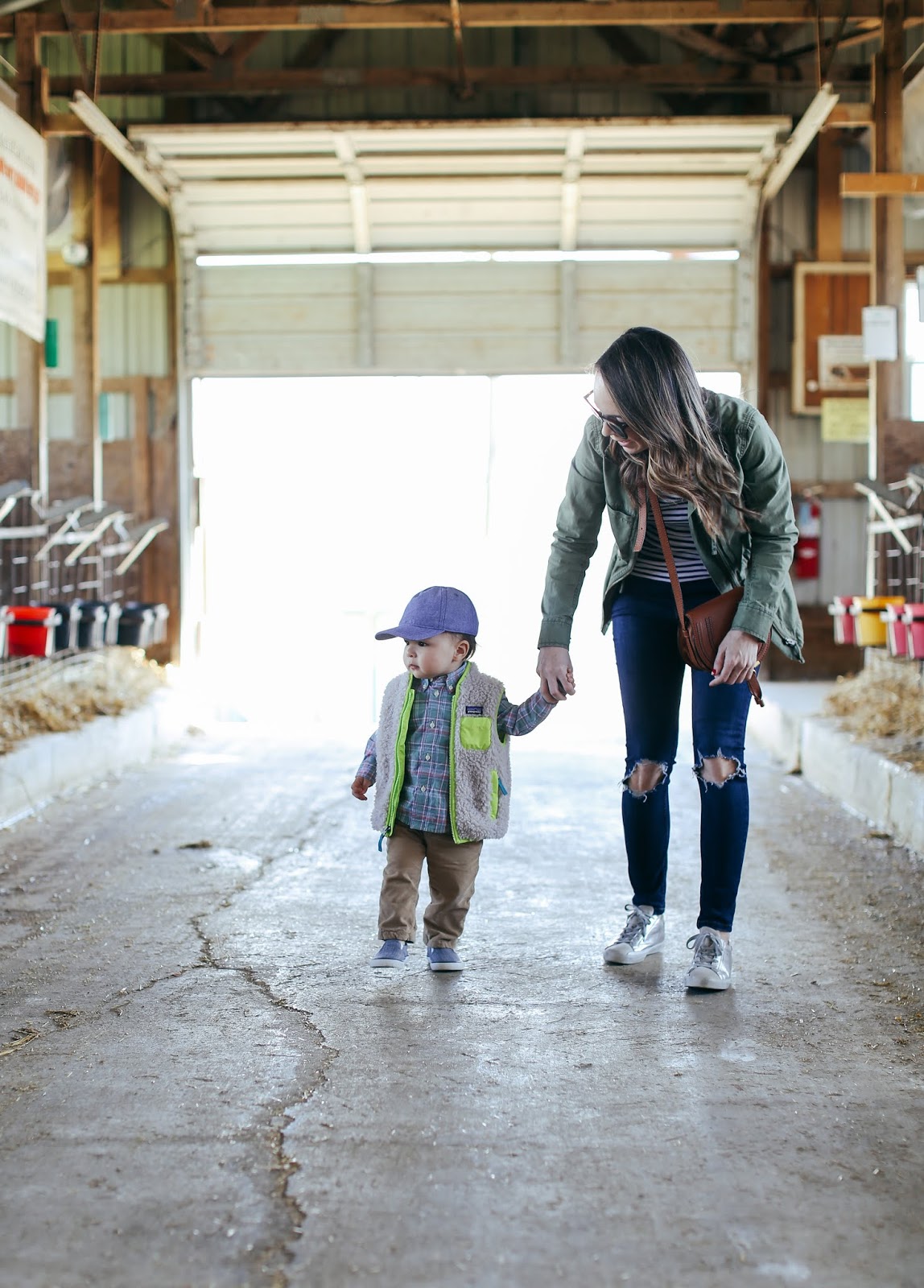 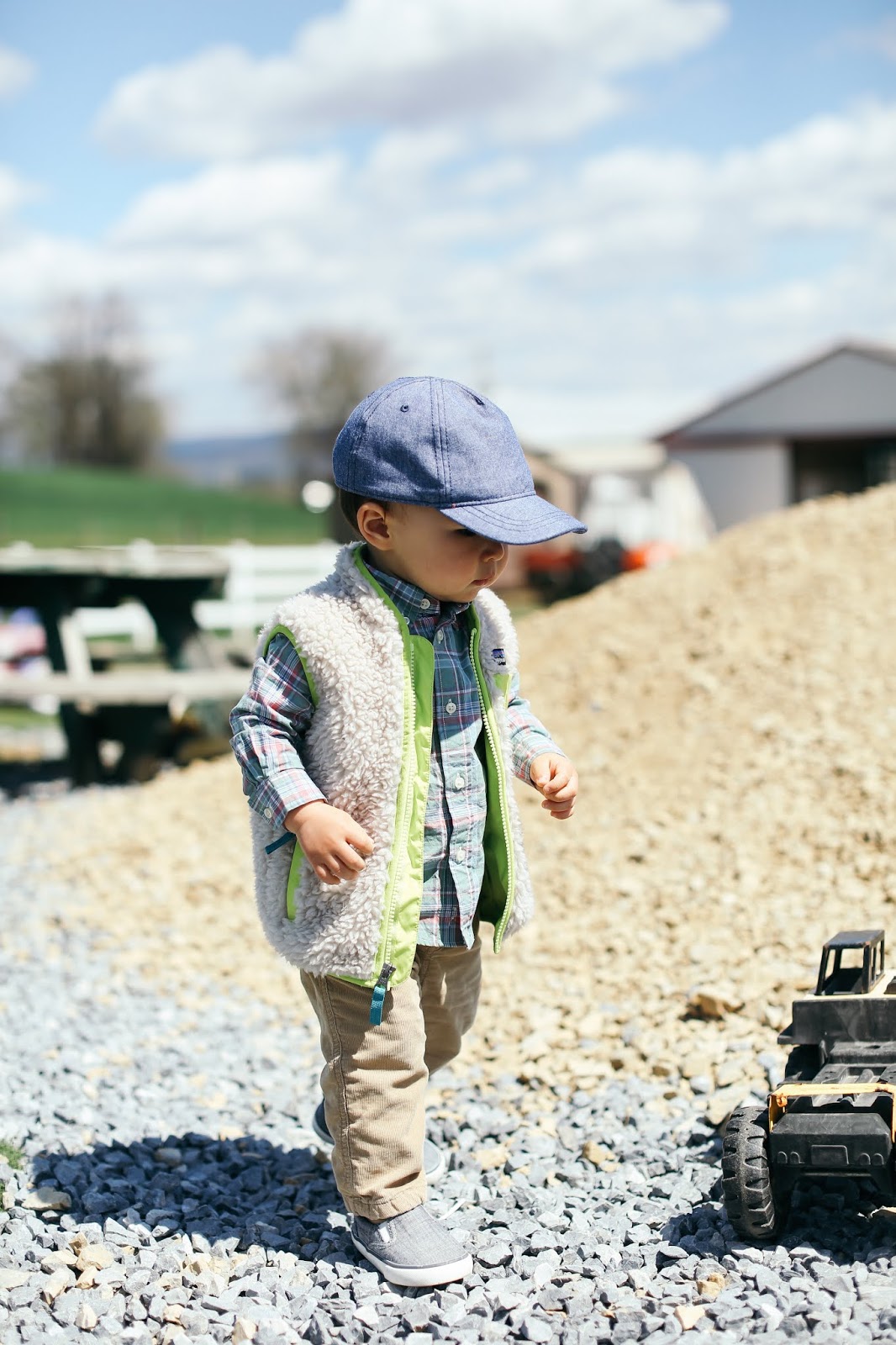 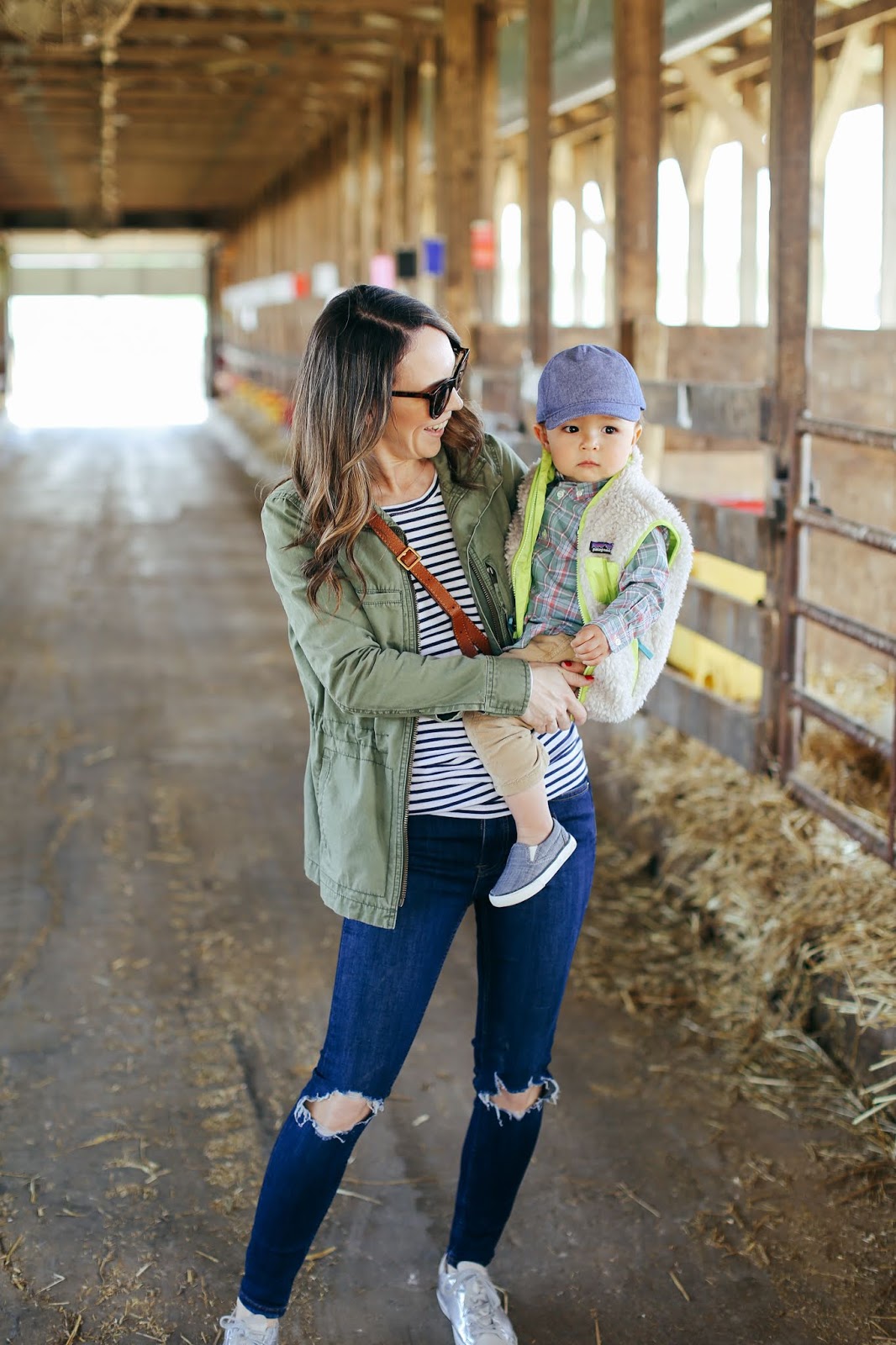 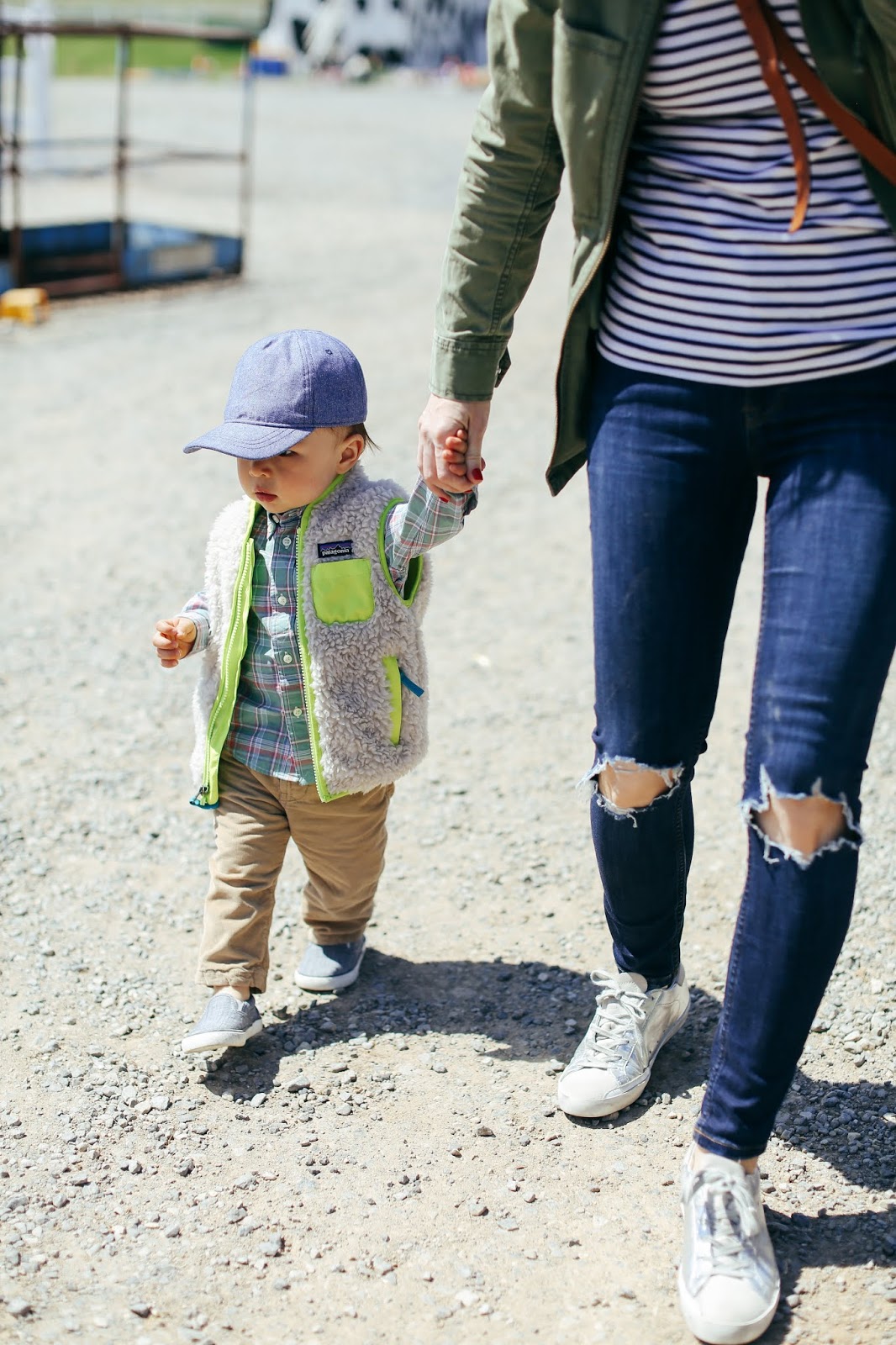 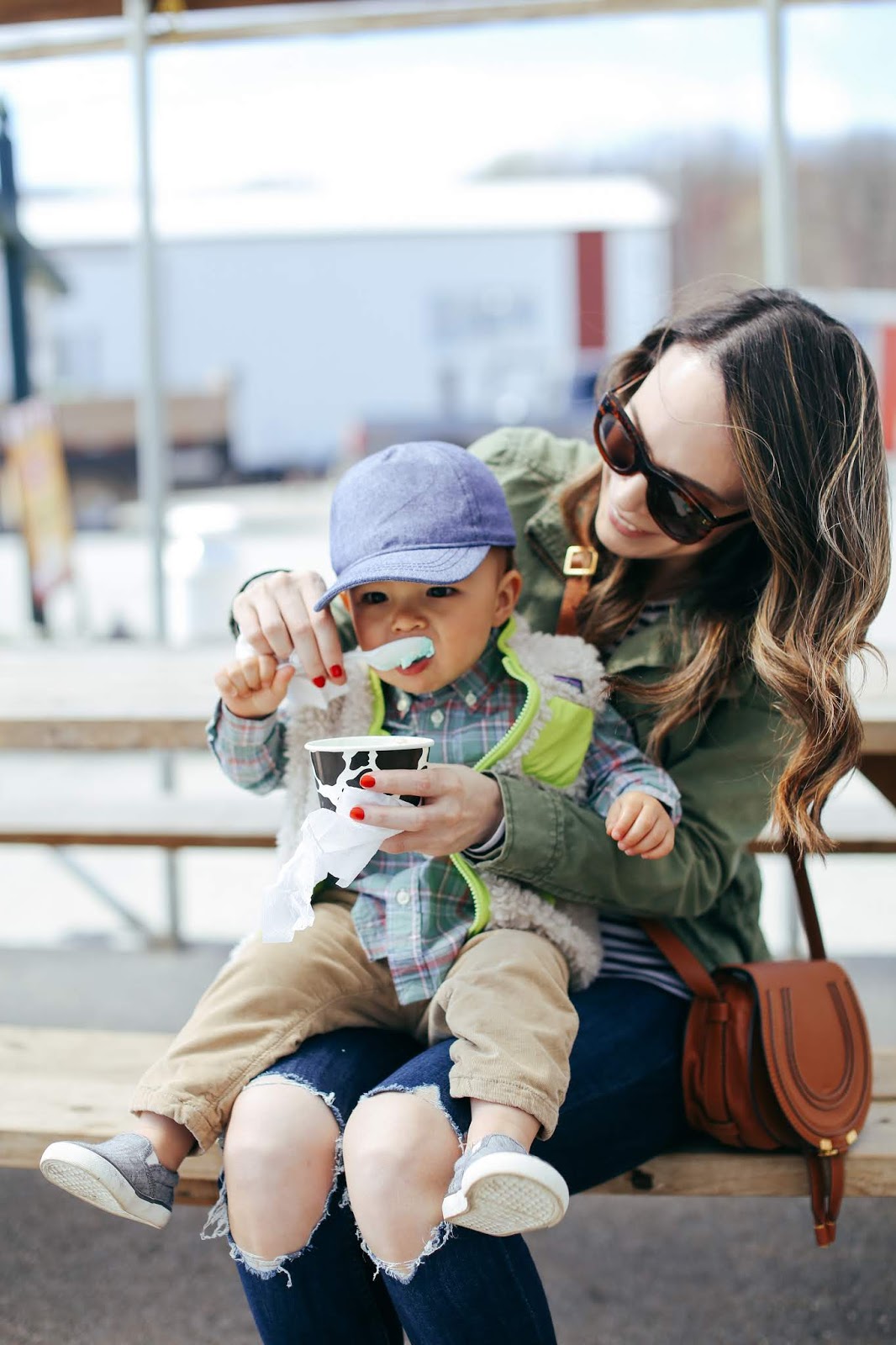 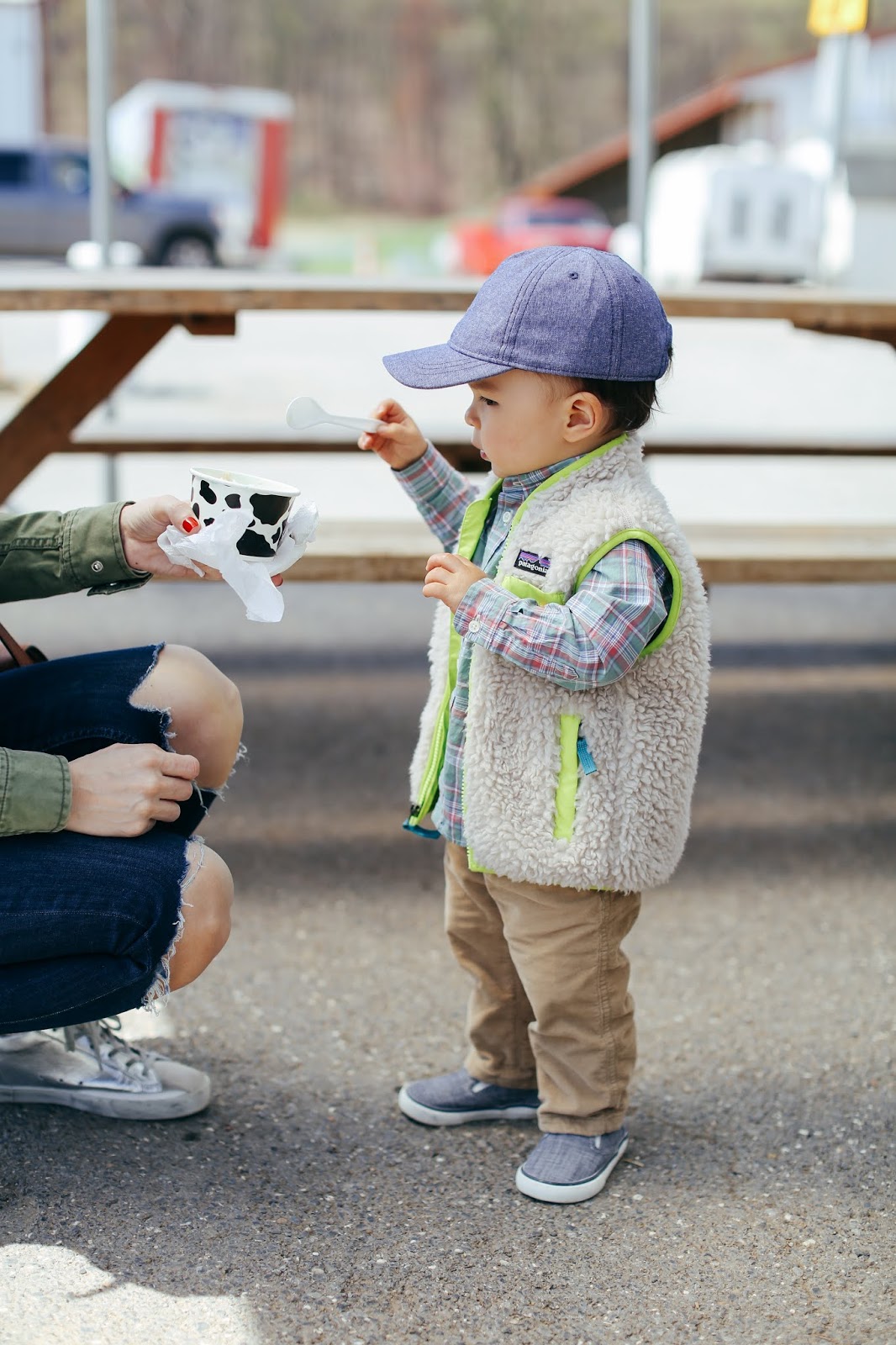 Maree outfit details: Jacket | Shirt | Jeans | Bag | Sneakers (similar) | Sunglasses (similar)
Miles outfit details: Vest (similar) | Shirt (similar) | Pants (similar) | Shoes | Hat | Stroller
Just looking at these pictures of Miles, I can’t believe how big he has gotten in the past 6 months. He looks like a little boy to me now instead of a baby. *insert crying emoji* I don’t want him to grow up but at the same time, I love watching him reach new milestones. His energy and joy for life is infectious and I adore seeing him explore the world. My last update for him was when he had just turned a year and I shared my top 20 first year baby essentials. He is now 17 months and while some things have definitely changed, his schedule for the most part has stayed the same. We started sleep training when he was 2 months old (this was the book we used which was truly amazing) and keep him on a schedule every day.
The best part about having him on a schedule is that when we deviate from it, it’s not a big deal and he easily falls back into his routine the next day. Miles for the most part is a happy little guy but is definitely entering toddlerhood. He is more stubborn and will cry if he doesn’t get his way, but thankfully can be redirected almost immediately so it doesn’t last long. A majority of his teeth have come in at this point, with only a few remaining. We can always tell if he is teething because he doesn’t act like himself, is hard to entertain and fusses almost all day long.
When it comes to sleeping, he is still going strong from 7pm to 7/7:30 a.m. which he has been doing since he was 3 months old (that book really worked for us). We began putting him down awake as an infant so he could put himself to sleep and that habit has really paid off. He will sometimes play and babble in his crib for a full 30-45 minutes after putting him down before he finally falls asleep. We started letting him have a few stuffed animals in the crib when he was a year old so he will play with those until he falls asleep.
His favorite thing in the world is to go out anywhere. Grocery stores, restaurants, malls, parks – you name it, he loves it. He is quite social and loves to people watch. He will be in the worst mood at home fussing non-stop, but as soon as I take him out he immediately calms down and has a good time. When I was a new mom I was so nervous to take him places because I was afraid he would cry or fuss and it can be overwhelming when you aren’t used to dealing with it. But my friend told me to take him places for 10-15 minutes at a time just to get comfortable with the whole process. I would often take him to Target and do nothing else besides walk the aisles for 10 minutes. I didn’t need to buy anything, I simply wanted to work on not being afraid. Slowly but surely I became more confident and now I love taking him with me because he enjoys it so much.
Eating has been an up and down process because he will like something one day and the next not want it. #toddlers For now, some of his favorites are banana pancakes (they are only 3 ingredients: oats, egg and banana), avocados (he will eat an entire one in a day!), cheese sticks, Dr. Praeger’s spinach littles, raspberries and cheerios. He eats more than that but those are things that he very rarely will turn down. He’s finally able to use a fork and spoon (I bought him this set) quite well and it’s so cute to watch him eat with them. He’s babbling up a storm and says a few words like bird, bath, dada, mama and juice (well he makes a juice-like sound LOL) to name a few.
Here’s a look at his current schedule – it will change occasionally but for the most part he thrives on structure so we stick to this daily:
You can find all my past posts on Miles and my favorites for his clothes, toys, newborn essentials, etc here. I also thought I would put some of my daily essentials for him in the widget below.

Shop some of the daily things we use for Miles 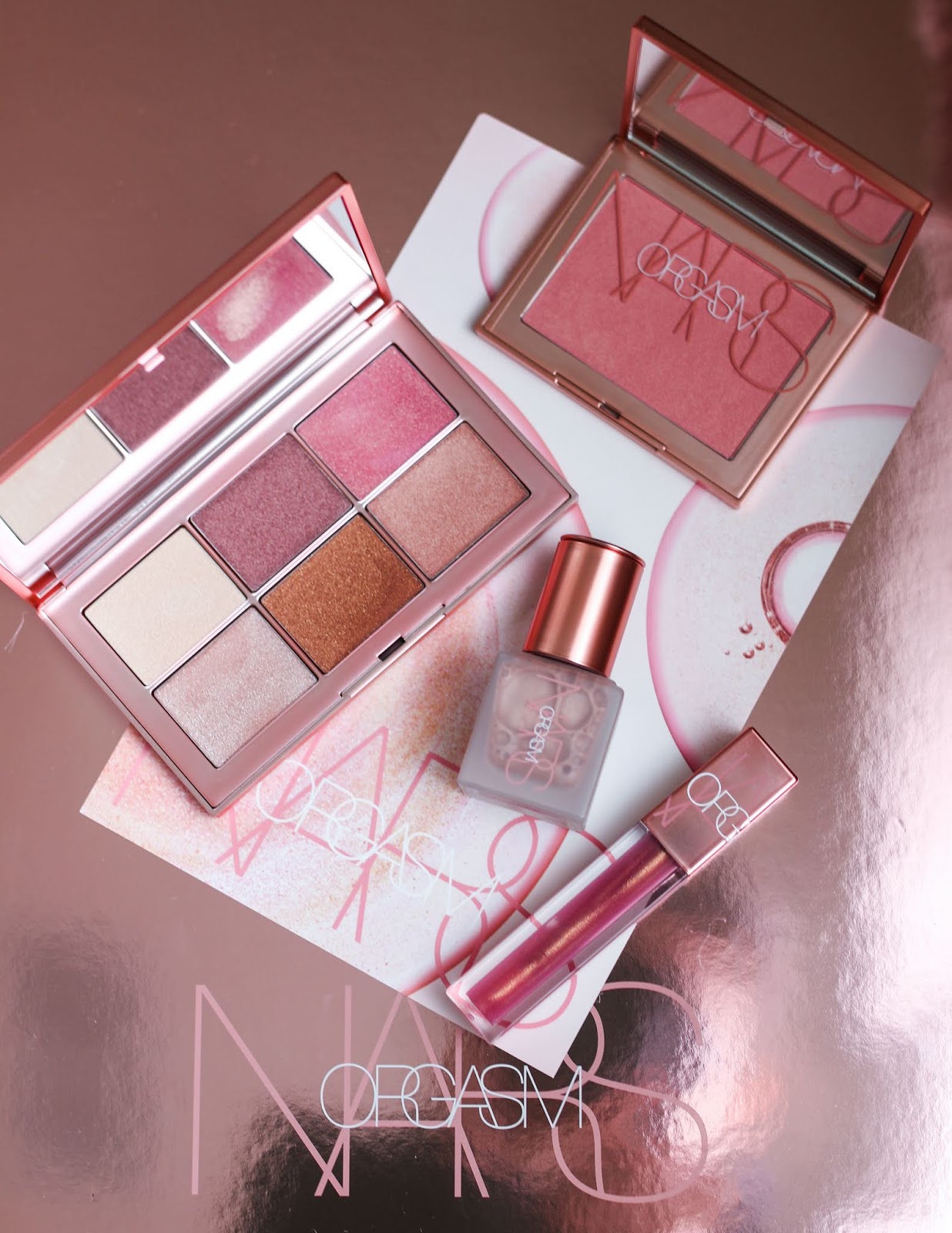 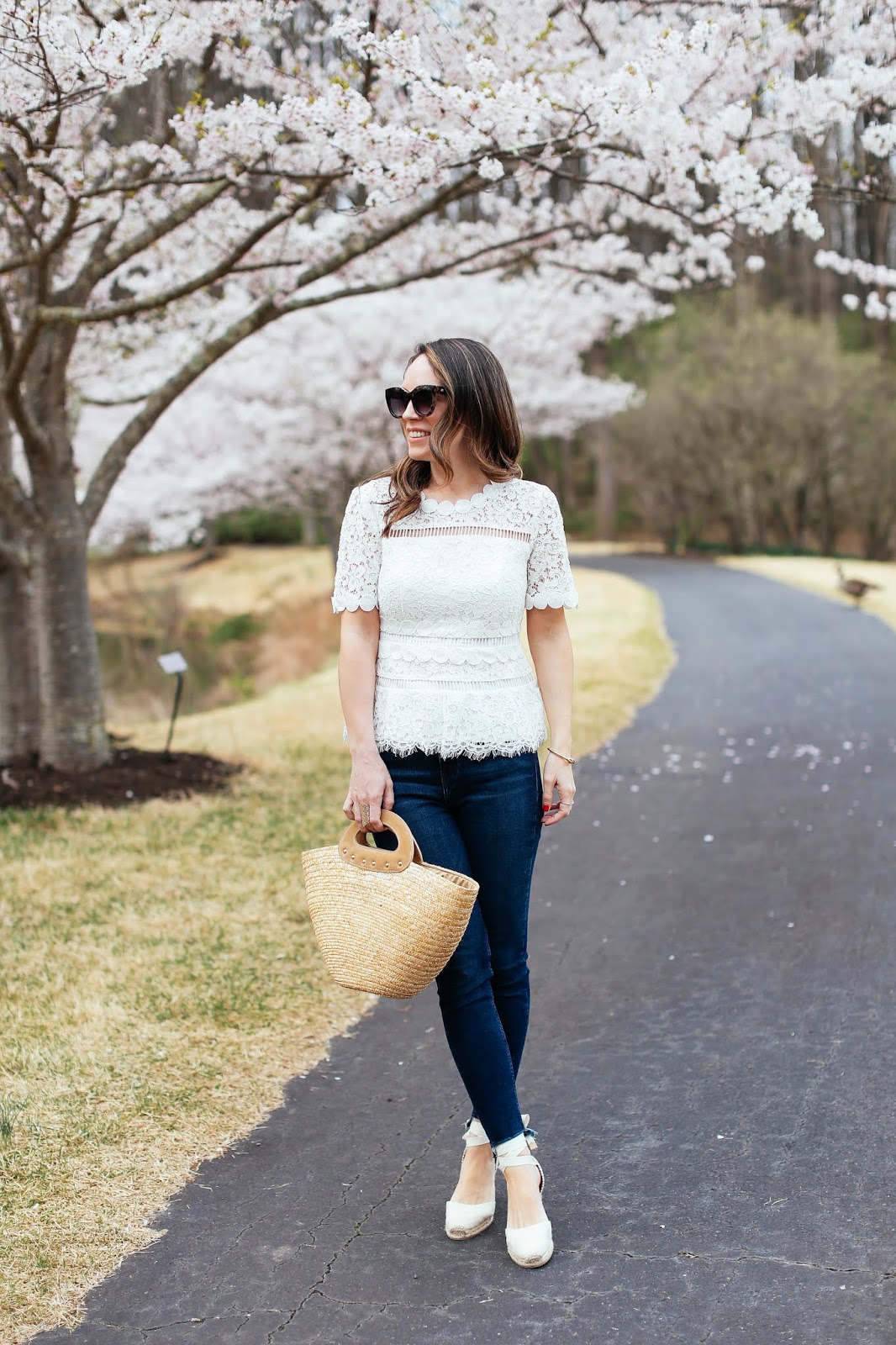 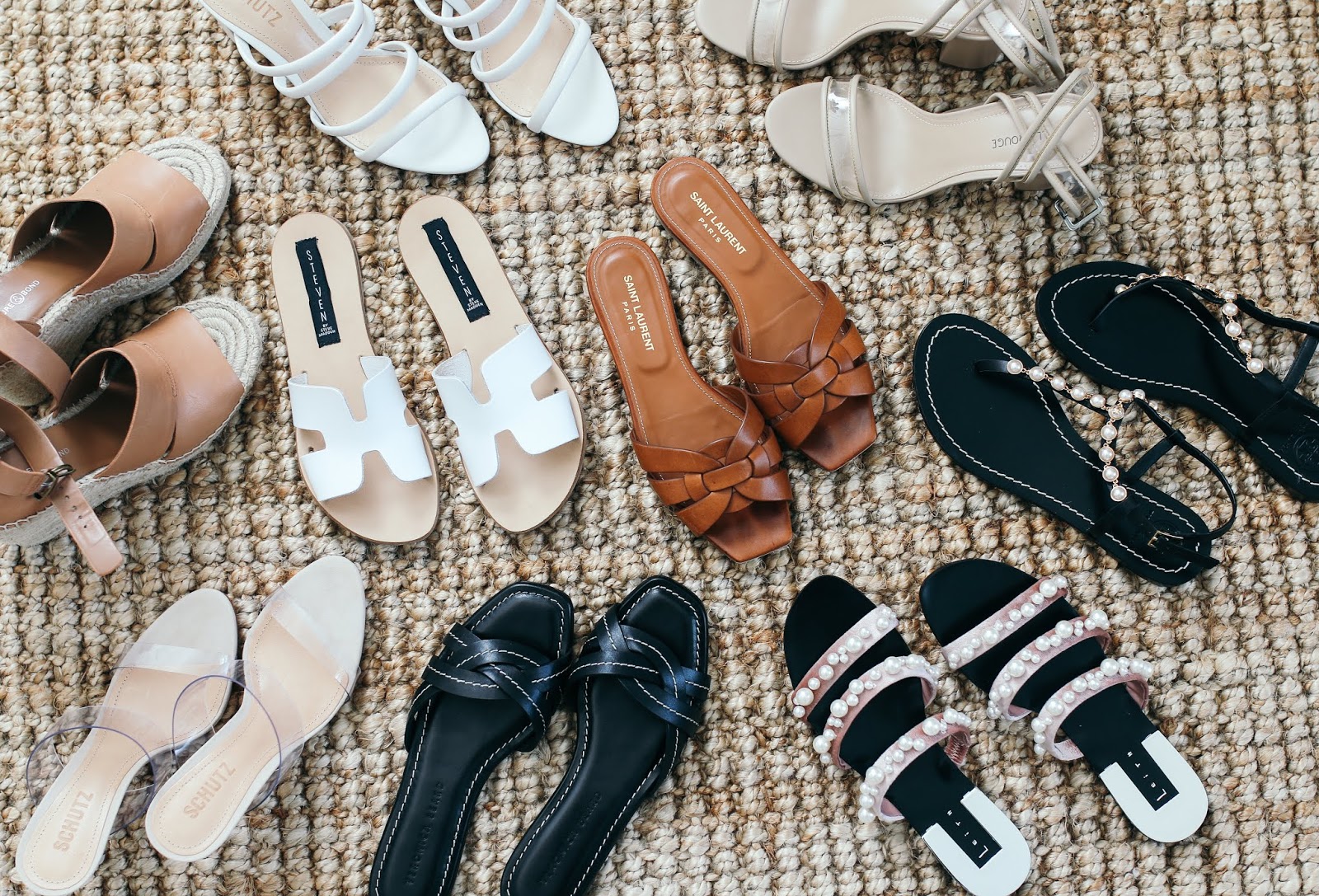 Spring Shoe Haul – All My Favorite Styles For Spring and Summer

It’s shoes galore in today’s video! All my recent spring shoe purchases along with some old favorites that are back in stock this year. Enjoy and don’t 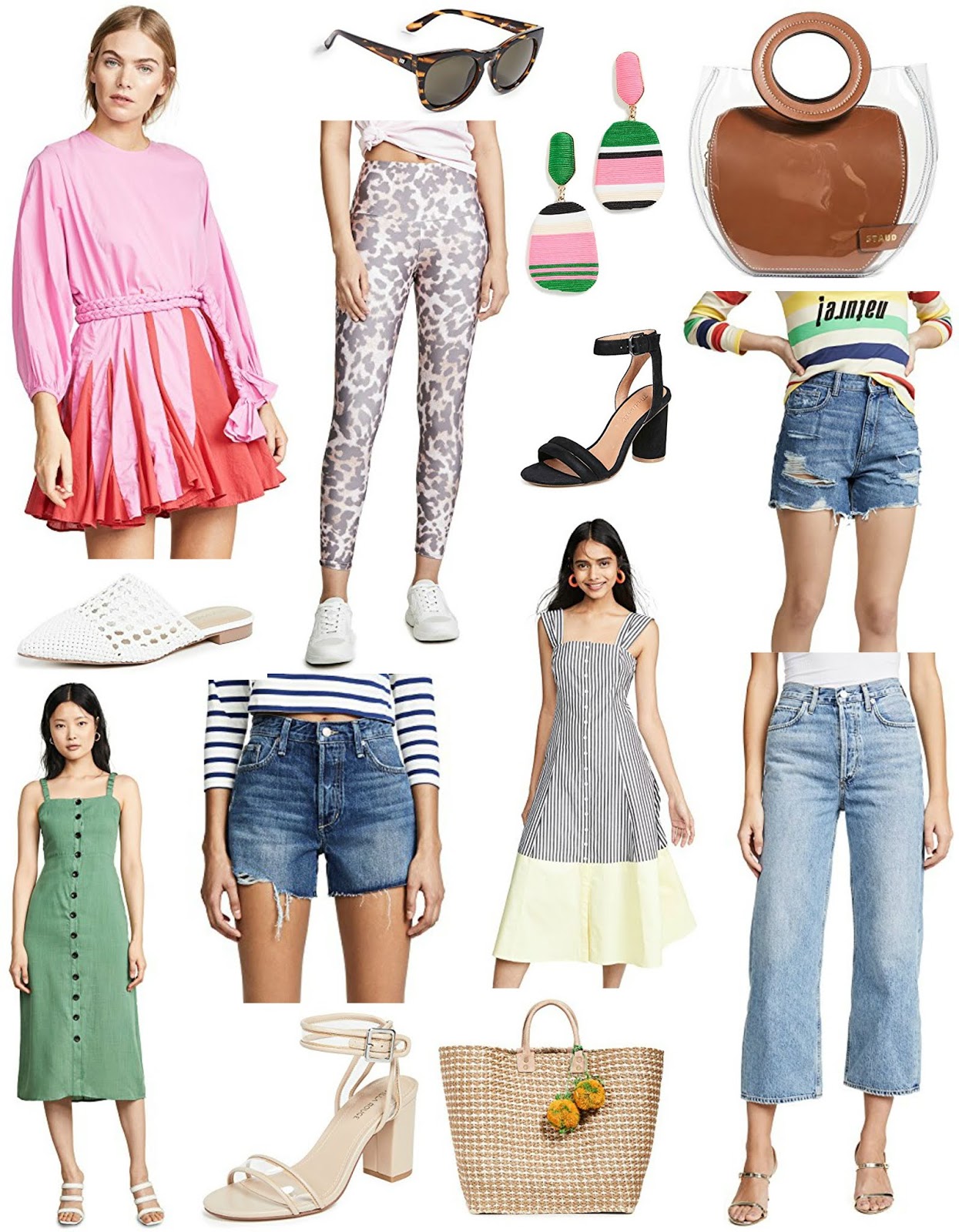 Shopbop Sale Picks + Some of My Recent Outfits Included in the Sale!

Let the spring shopping commence! The Shopbop sale is back again so I thought I would put all my recommendations in today’s post. It’s 20% off any