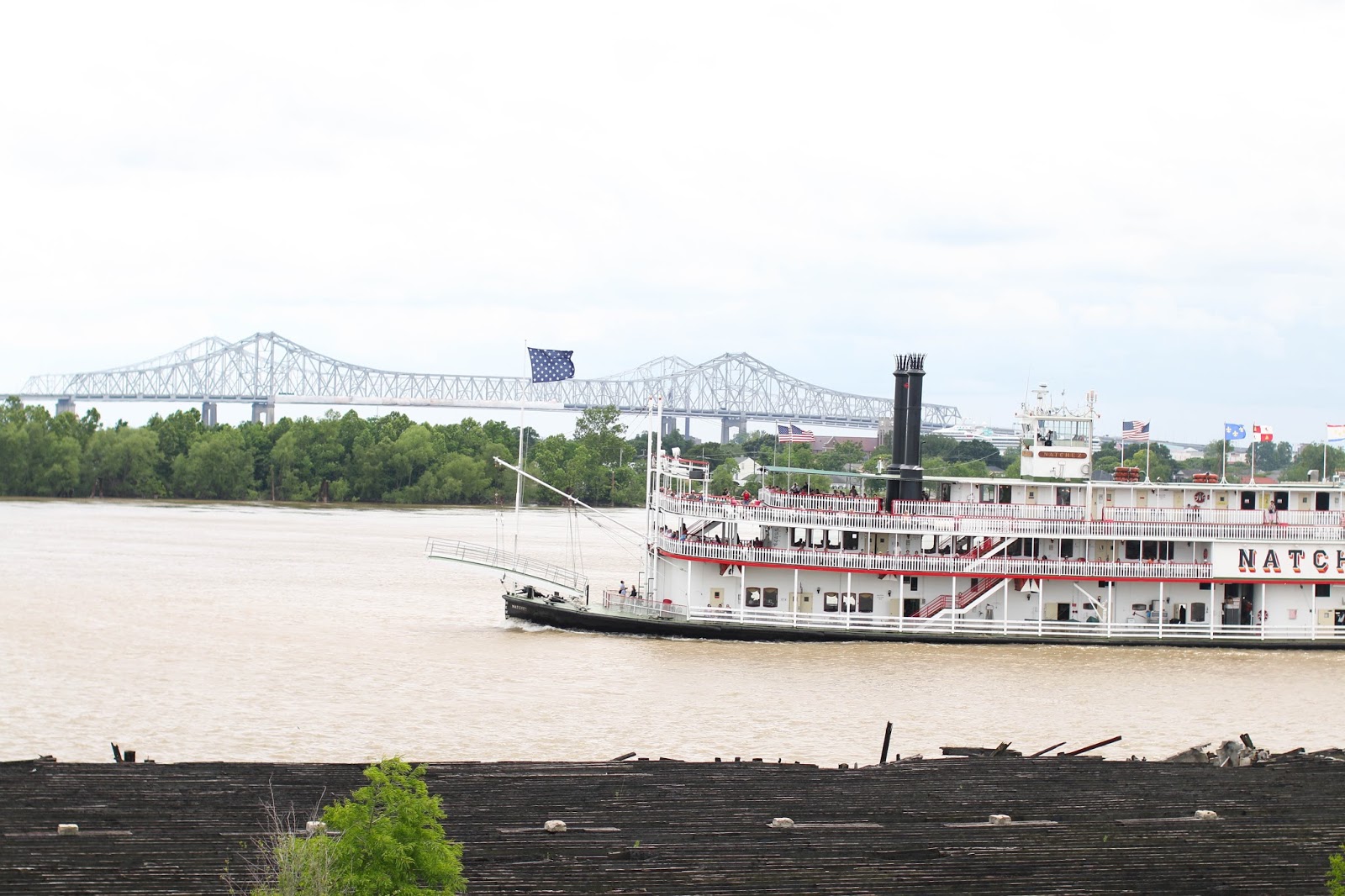 We are rounding out the last leg of our trip, but our time in New Orleans was one of our most memorable. Here is a recap of some highlights from our visit:
Neighborhoods We Enjoyed 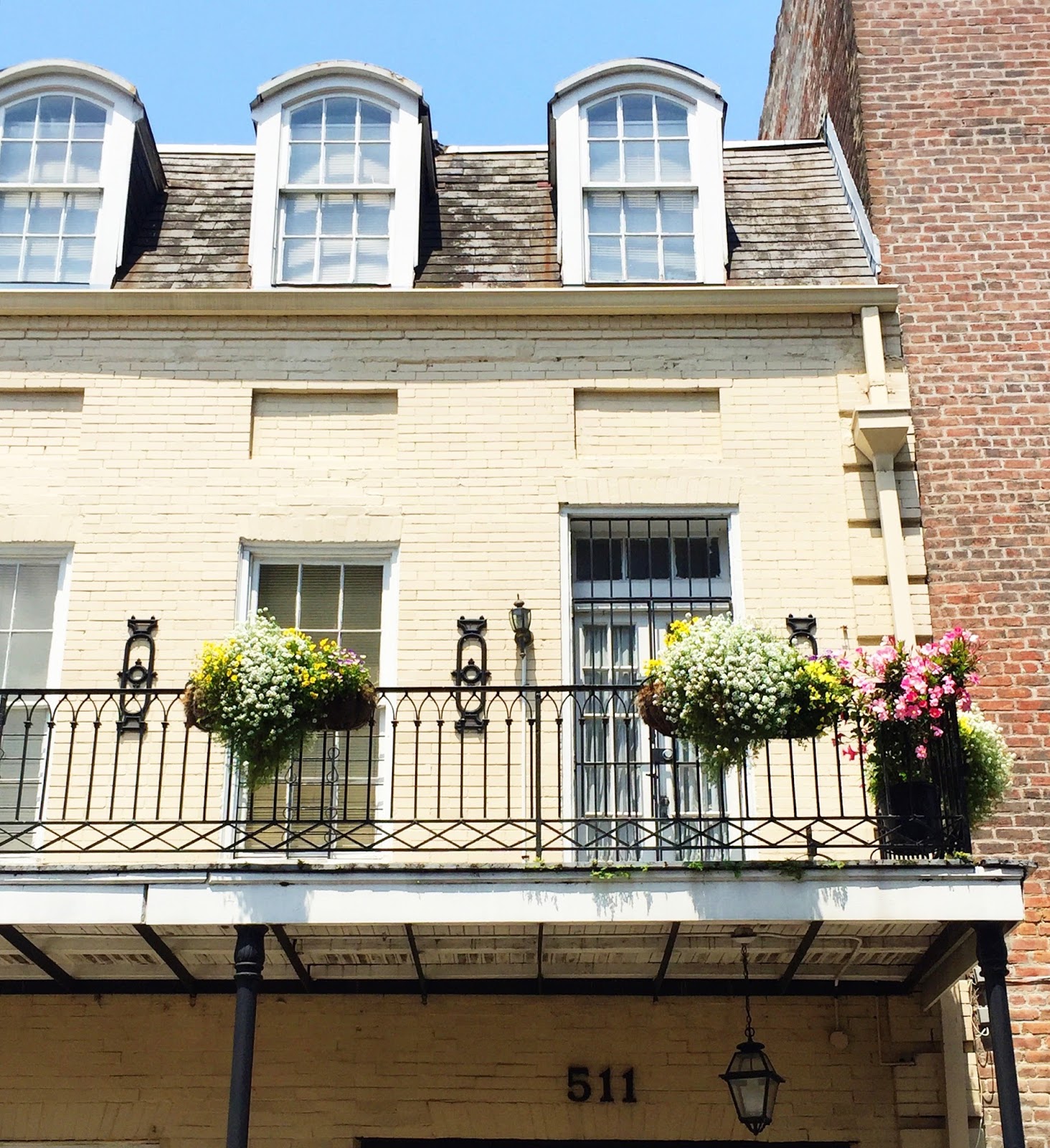 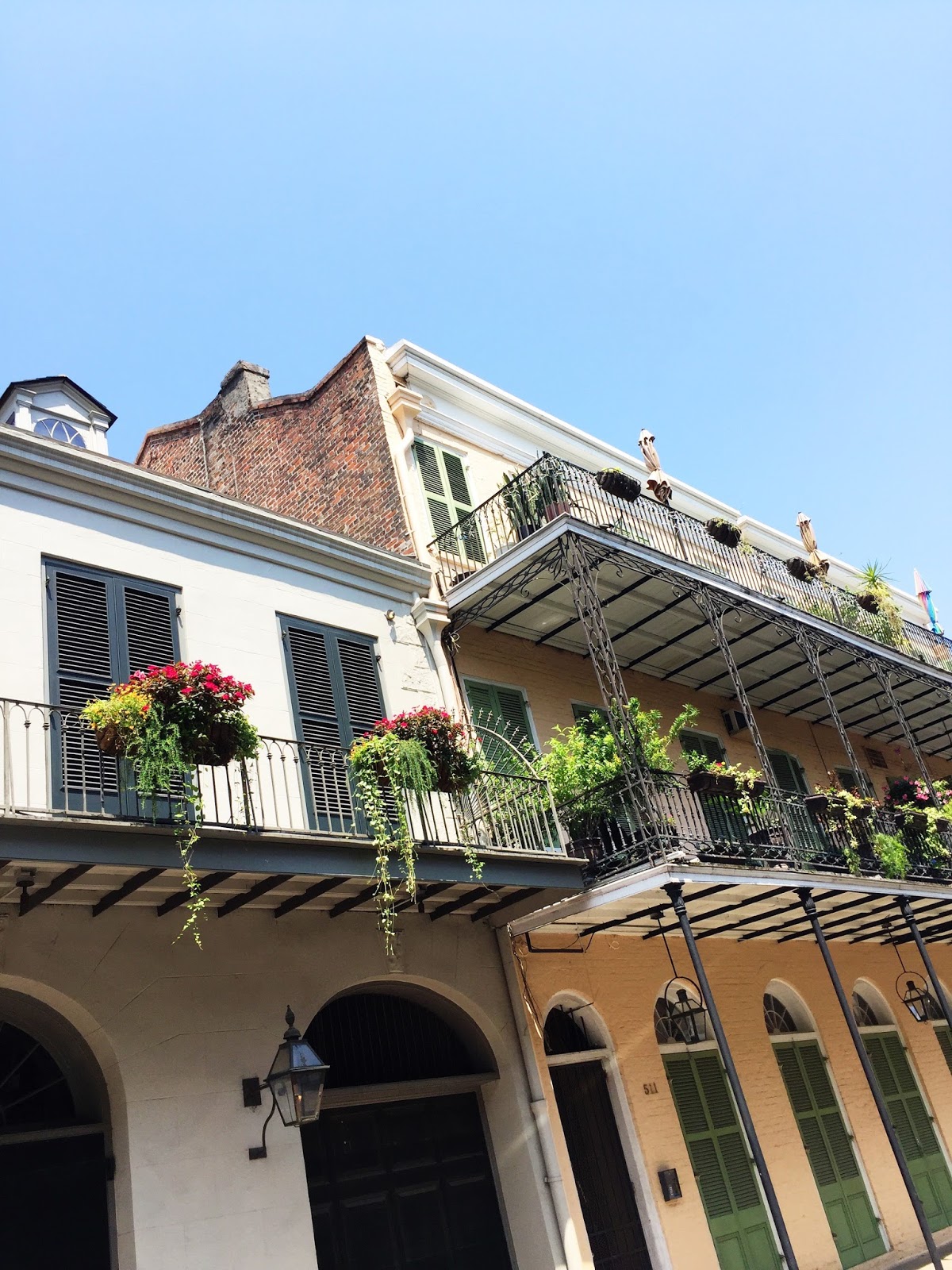 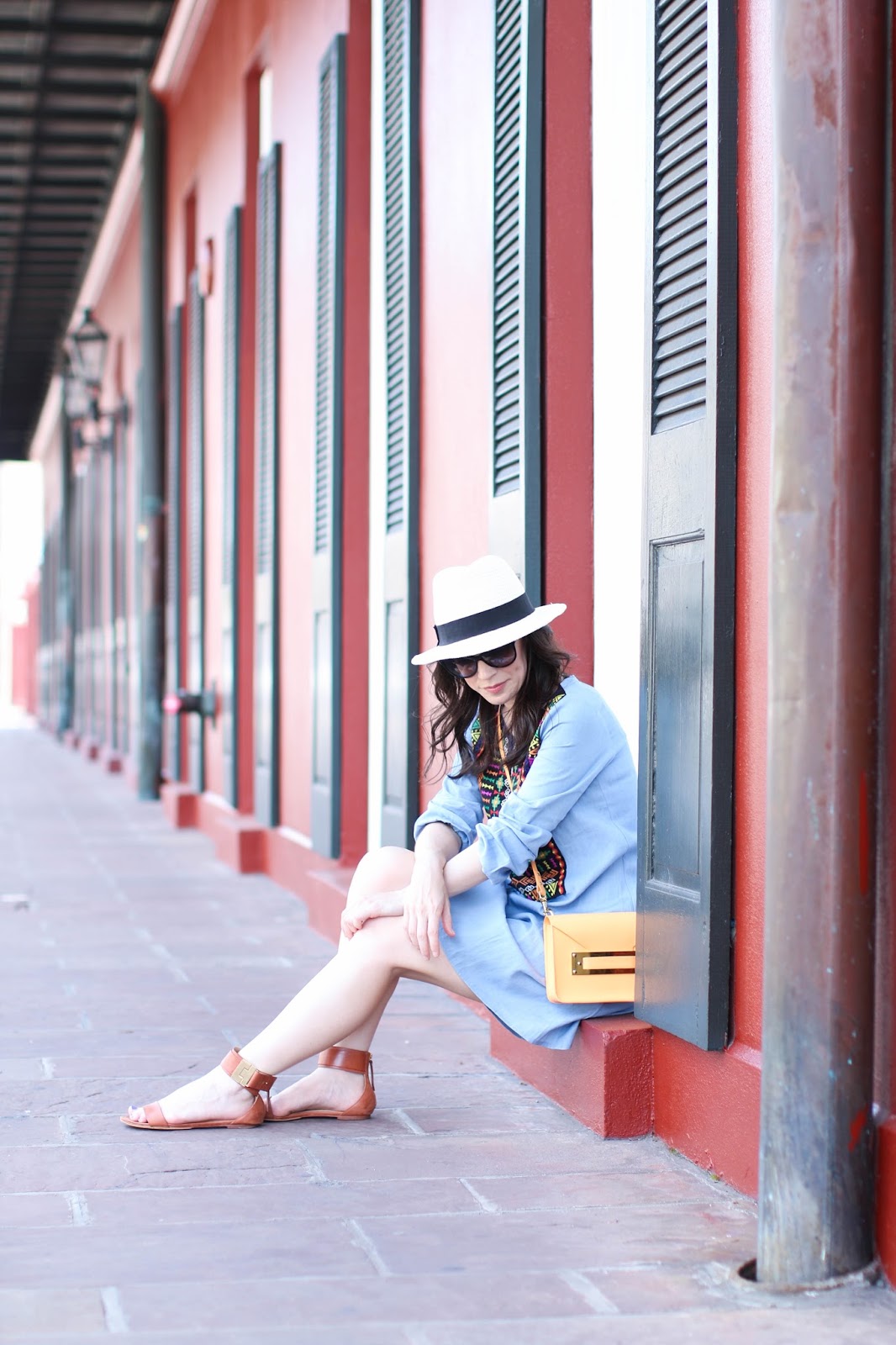 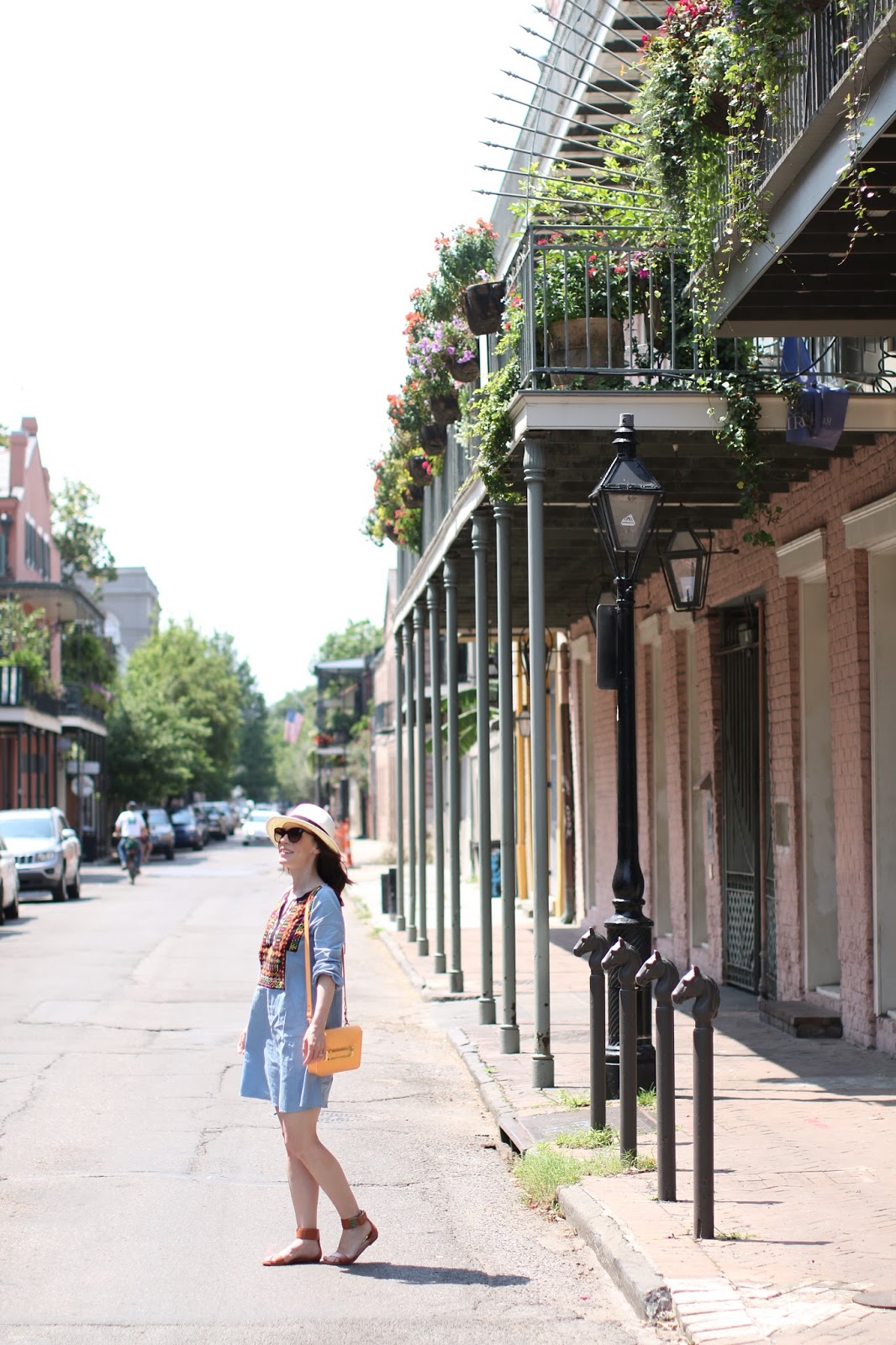 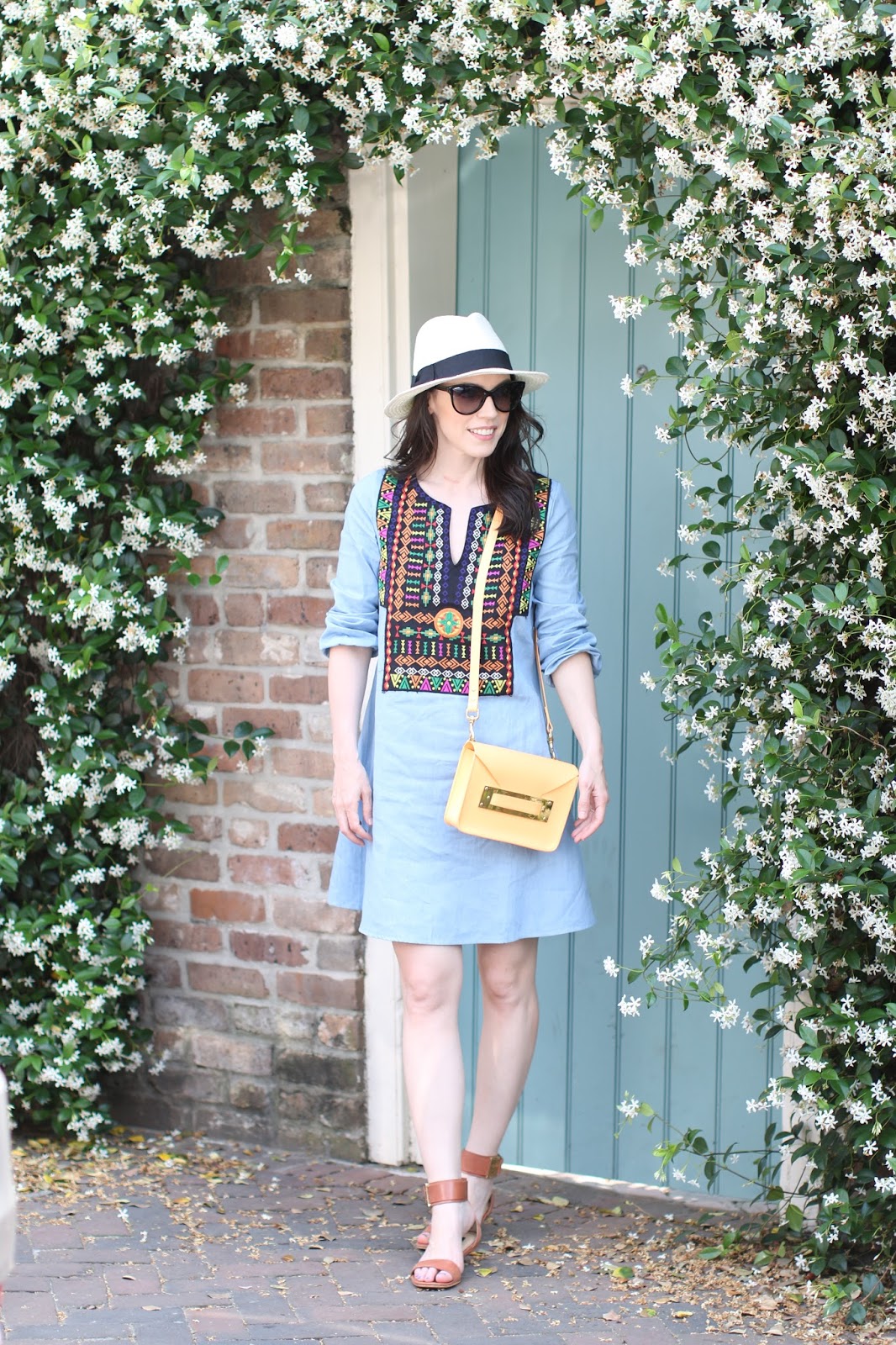 1. French Quarter – There were two parts to the French Quarter in my opinion – Bourbon Street closer to Canal and the area closer to Frenchmen Street. Maybe people from New Orleans understand the difference between these two places easily, but I figured the French Quarter was all one darling, charming place. We initially began out on Canal Street where our streetcar dropped us off, and just to say I did it – I walked down Bourbon Street. I have to be honest, it is disgusting. Smelly and dirty is an understatement, so I tried to get to the next street over as quickly as possible. I heard that Frenchmen Street was where things were the most beautiful so we took another streetcar over there and found what we were looking for. Gorgeous building with the iconic iron balconies, quaint streets, bright colors – it was magical. We wandered around through the streets, and each one was more amazing than the last. There is a large market located in the heart of this area so we picked up some souvenirs – I grabbed some local candles which smelled amazing. It’s hard to say whether I preferred this area over the Garden District because they both have their own personalities and charm, so I would say it is essential to see both areas. The Garden District seems quintessential southern and grand, whereas the French Quarter has a more artistic and bohemian vibe. 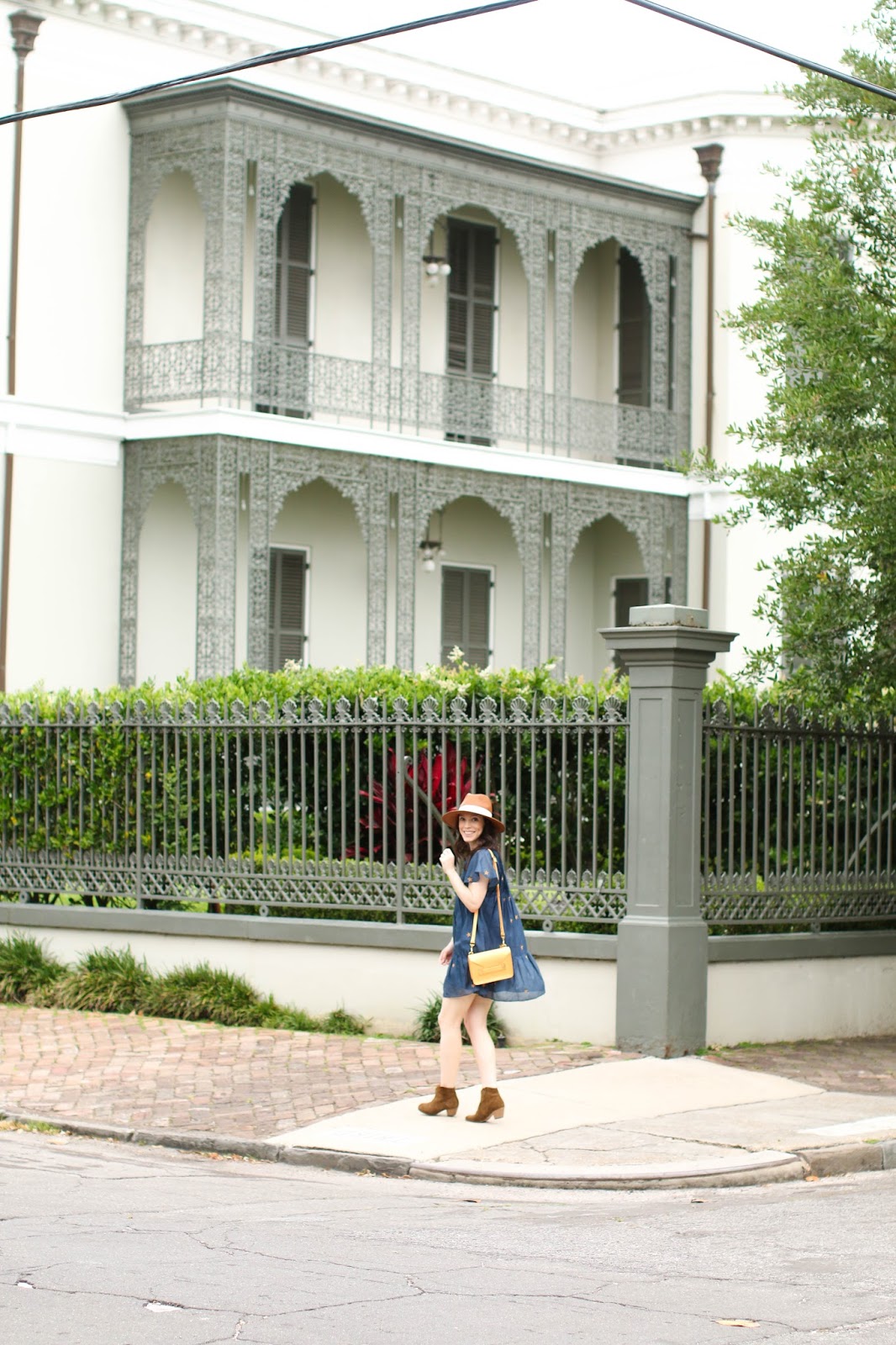 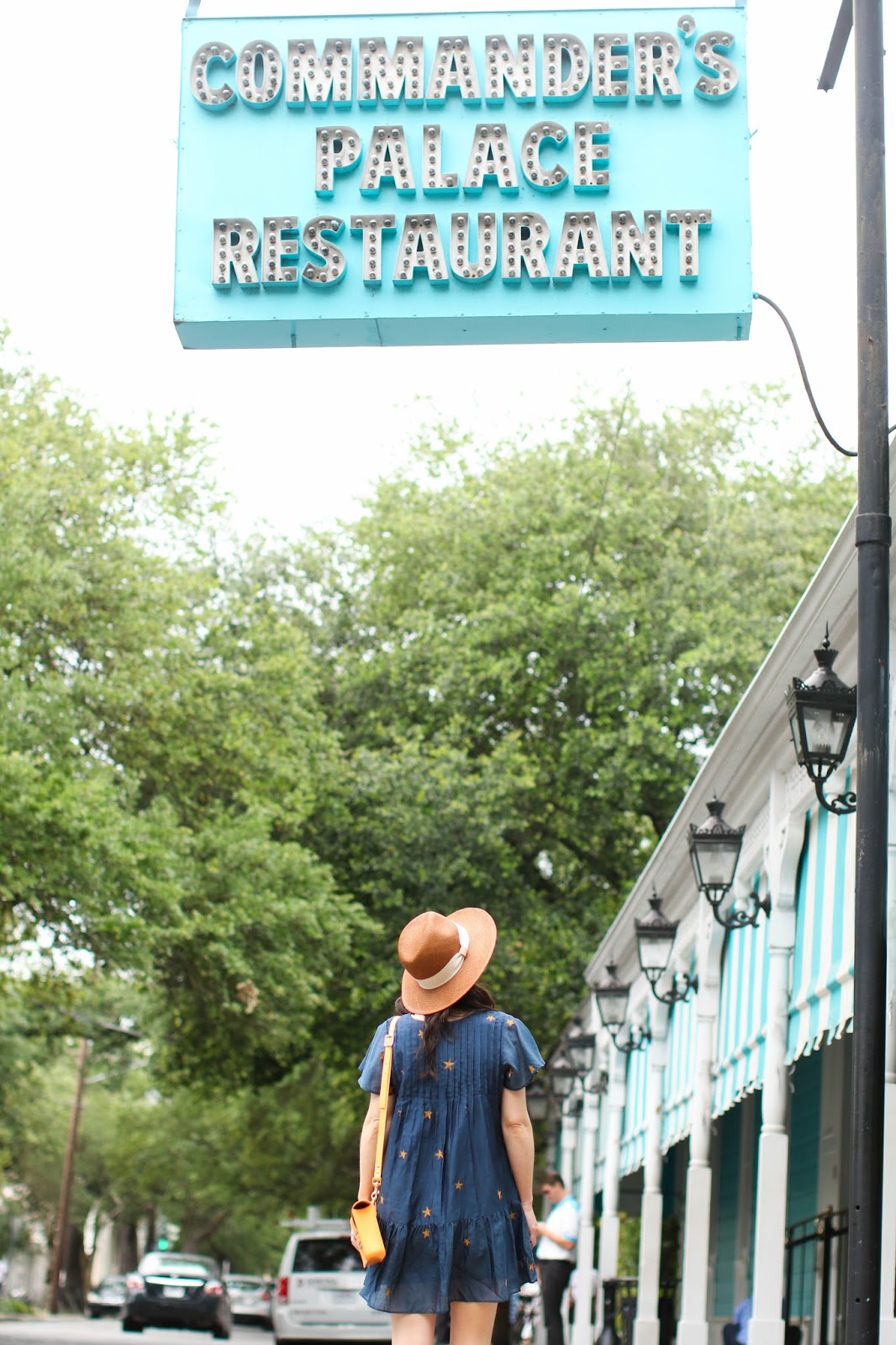 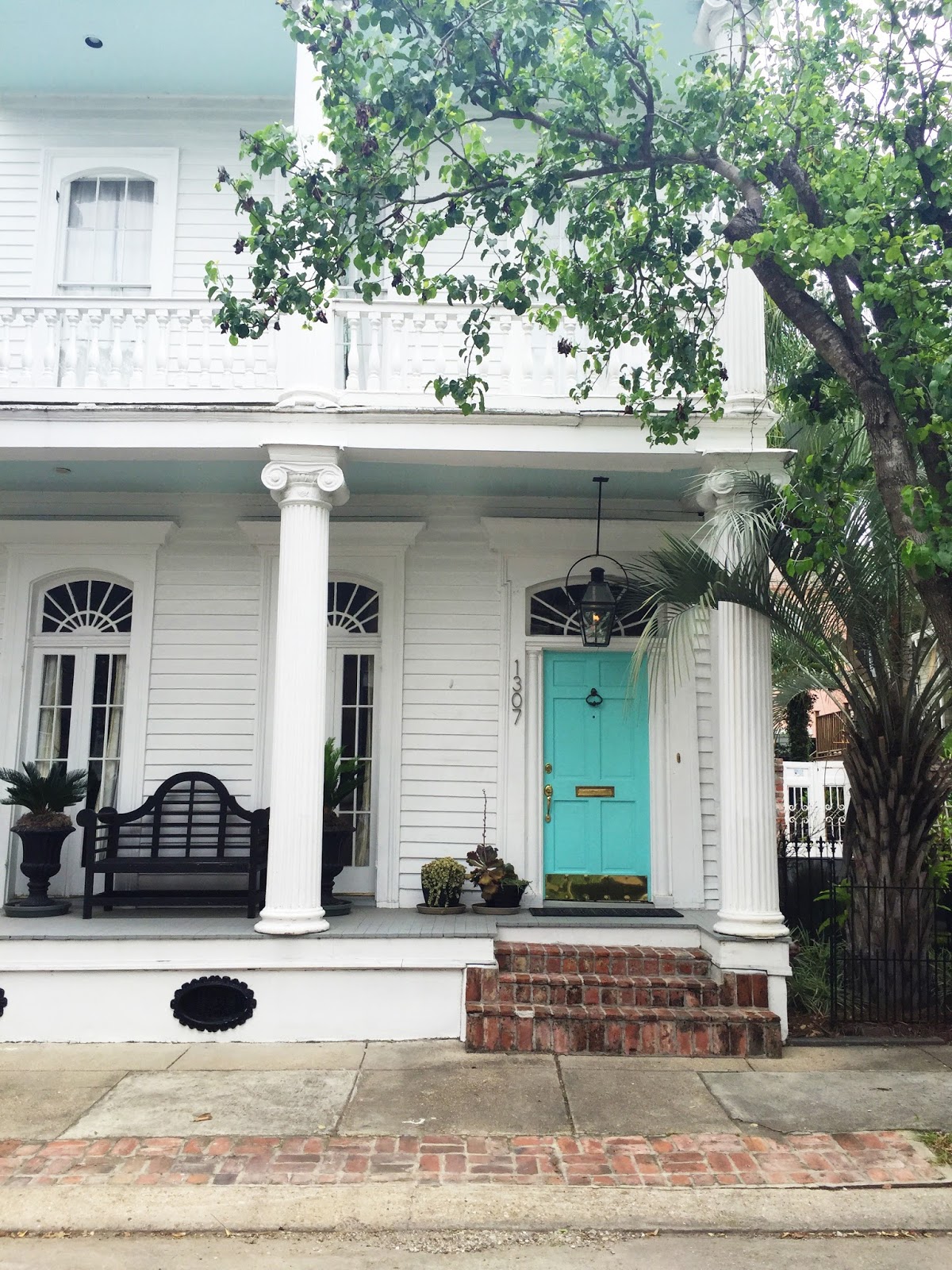 2. The Garden District – If you love large mansions and beautifully manicured gardens, you will want to spend all your time in this area. Magazine Street lines the edge of this district so after you are done wandering around all the stunning homes, you can grab a bite or a cup of coffee here. Commander’s Palace is a famous restaurant in the heart of the Garden District, but we didn’t feel like spending this kind of money for a meal while here, so we just snapped some pictures of it’s colorful outside decor. I really enjoyed spending time in this area and could probably walk each and every street and never tire of all the intricate porches, grand architecture and lush landscaping.
Things We Did 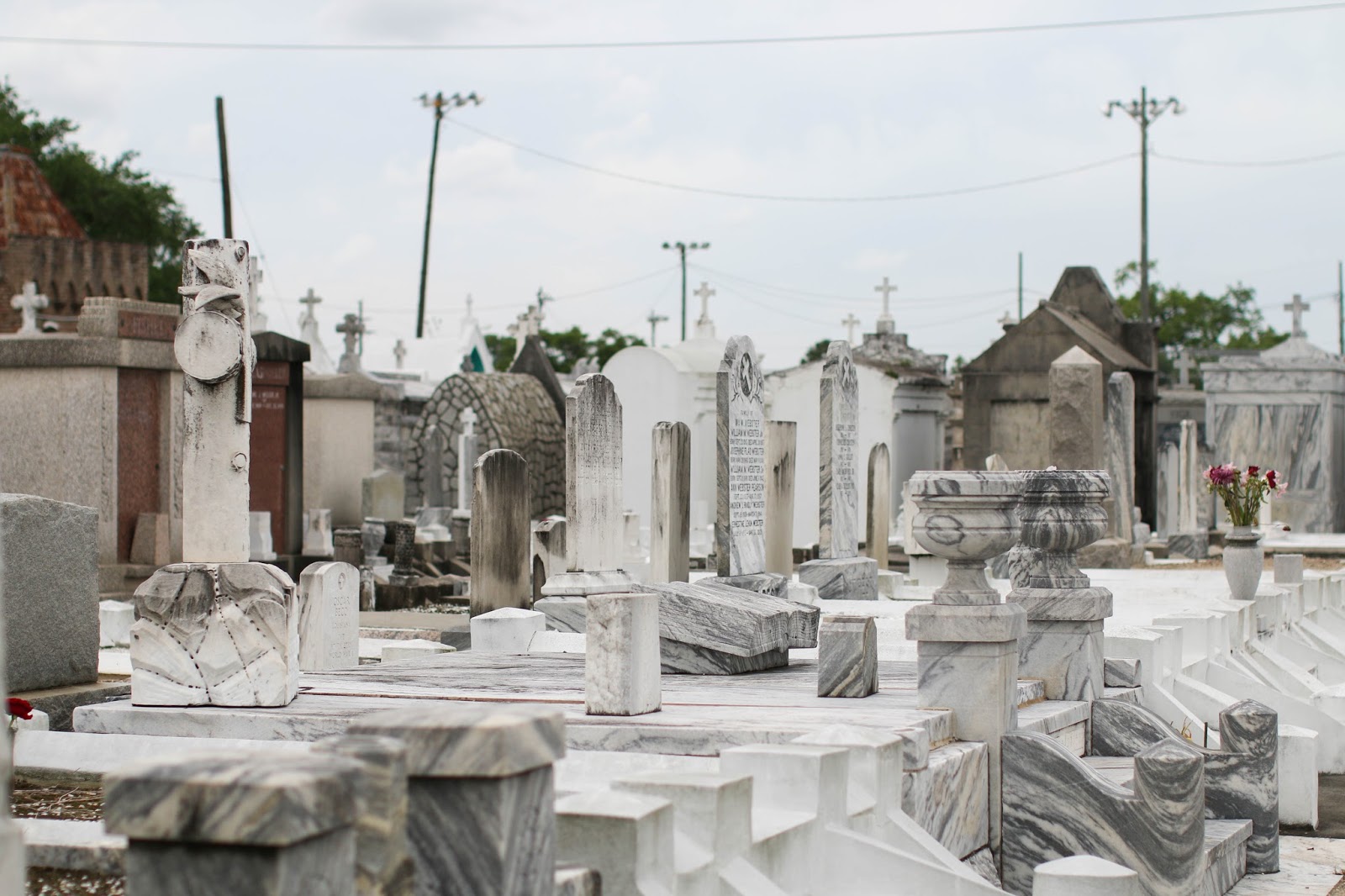 1. St. Roch Cemetery – I know, a cemetery tour sounds super morbid, right? But New Orleans cemeteries are iconic because they are all above ground tombs. Since the city is below sea level, most people were buried in tombs years ago and the heat and humidity basically decomposes the body to ashes. We went on a dark and overcast day and it was a slightly creepy, yet fascinating experience. There was something so beautiful about the whole place – so unlike anything I have ever seen before. 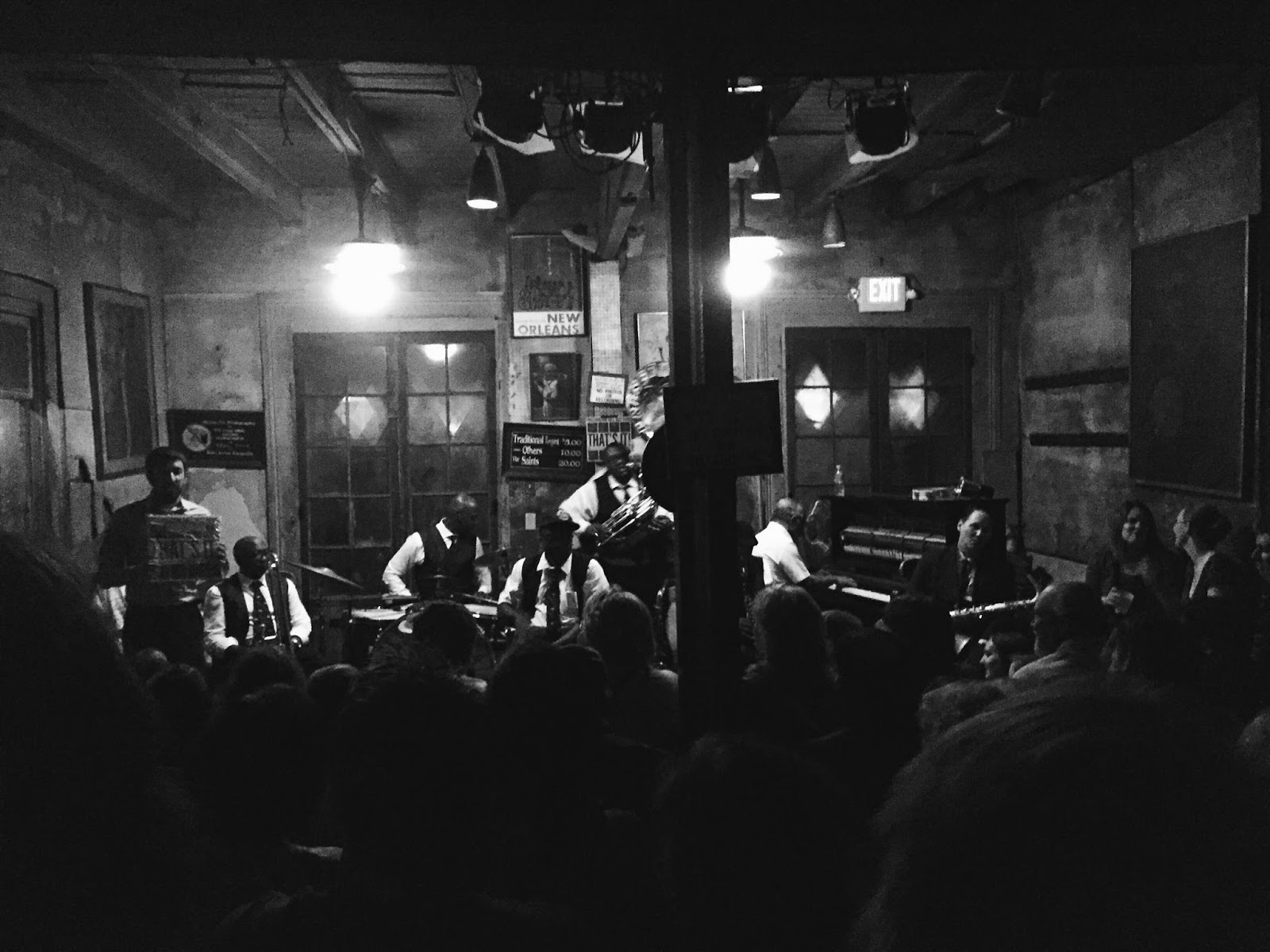 2. Preservation Hall – This concert felt like a classic New Orleans night in such an intimate atomosphere. You line up an hour before the show time and less than 100 people are let in to watch this group of guys place some of the best live jazz music. If you want to sit, get there more than an hour early because we arrived 45 minutes before show time and were too far back in line to get a seat. The show is only an hour but an incredibly memorable experience. Note: there is no bar or bathroom in this place – you are simply there to listen to music and leave. But don’t worry, there is a restaurant next door that you can use if you suffer from tiny bladder syndrome like myself. LOL 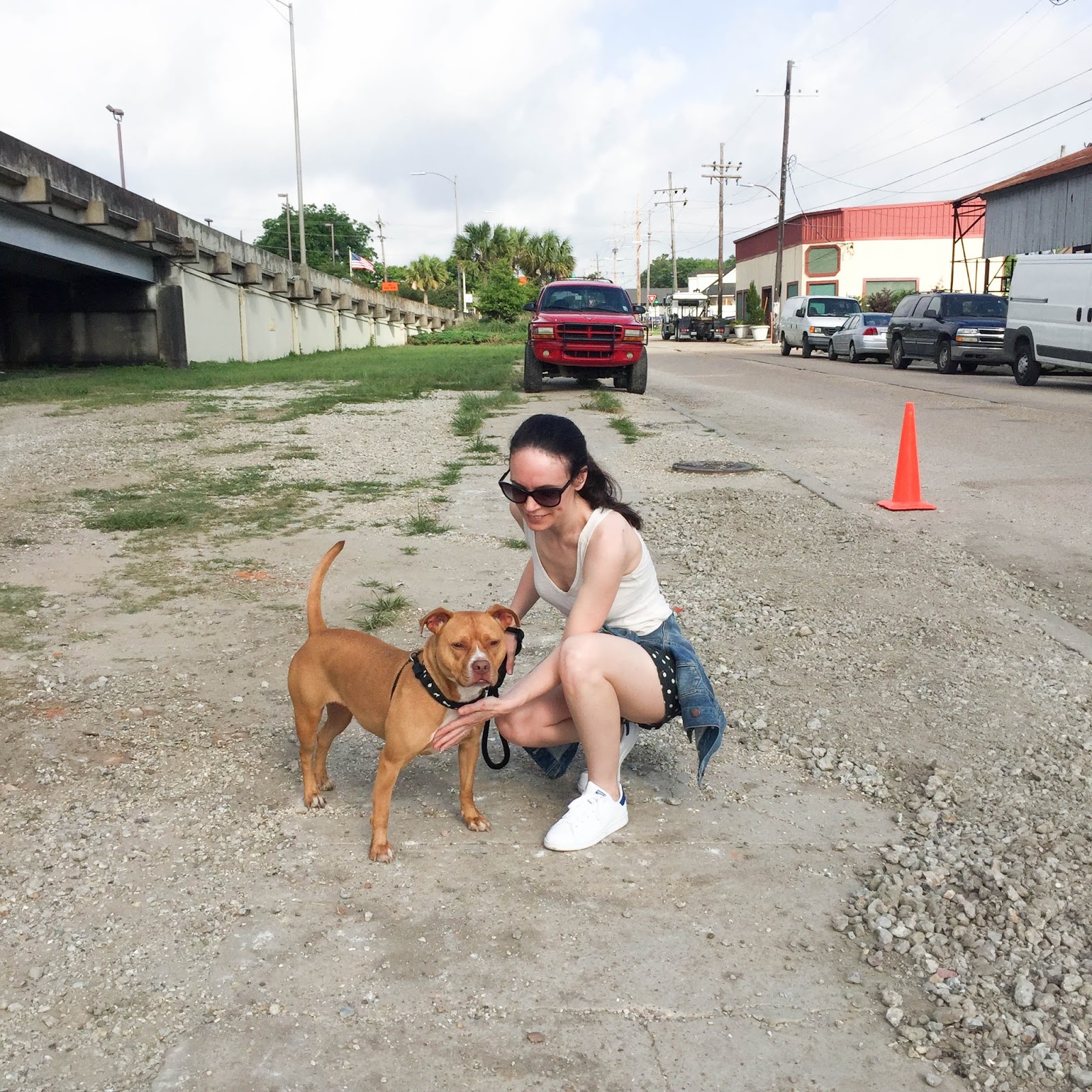 3. Villalobos Rescue Center – Fun little fact about me: I am a HUGE Pitbulls and Parolees fan. I have seen almost every episode of the show, and found out that you can show up at 8am each morning to volunteer to walk dogs. So that is what we did. We each got to walk three different dogs and loved it so much. They also do tours each day between 12-3, but we wanted to interact with the dogs more personally and the volunteer option sounded perfect. This was Go-Go and she was a doll. We both actually remembered her rescue episode so it was surreal to see and walk her in person. It may not be for everyone, but we loved this experience and it was one of the highlights of our entire trip.
Places We Ate 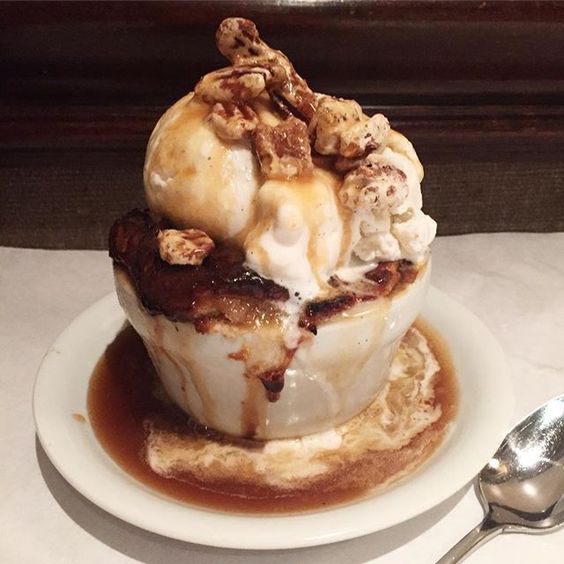 1. Luke – This was by far our favorite meal during our entire time in New Orleans. We started with the goat cheese stuffed squash blossoms which were mind-blowing, and Stan got a steak while I went with my usual mussels. For dessert we had the bread pudding and almost passed out with the bourbon pecan sauce they drizzle over it. If they sold it separately, I probably would have bought every bottle they had. Even if you don’t go for dinner, get this dessert at the bar. But don’t wear anything tight because you won’t be able to move after. 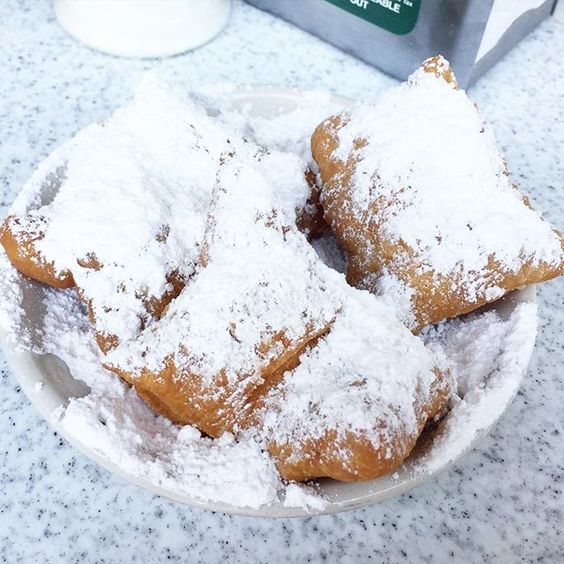 2. Cafe du Monde – Yes, we did it. It was messy and super chaotic, but we had the famous beignets and made it out alive. There is hardly even a menu here, just beignets and coffee. I even asked for skim milk and the waitress all but laughed in my face. Oh and here is the best tip – there is no hostess so just walk in and get yourself a table. Many tourists will stand in line waiting for someone to seat them, and the rest of us who know this secret just zoom by to seat ourselves. It’s not the cleanest place or the most relaxing, but you can check it off your bucket list. 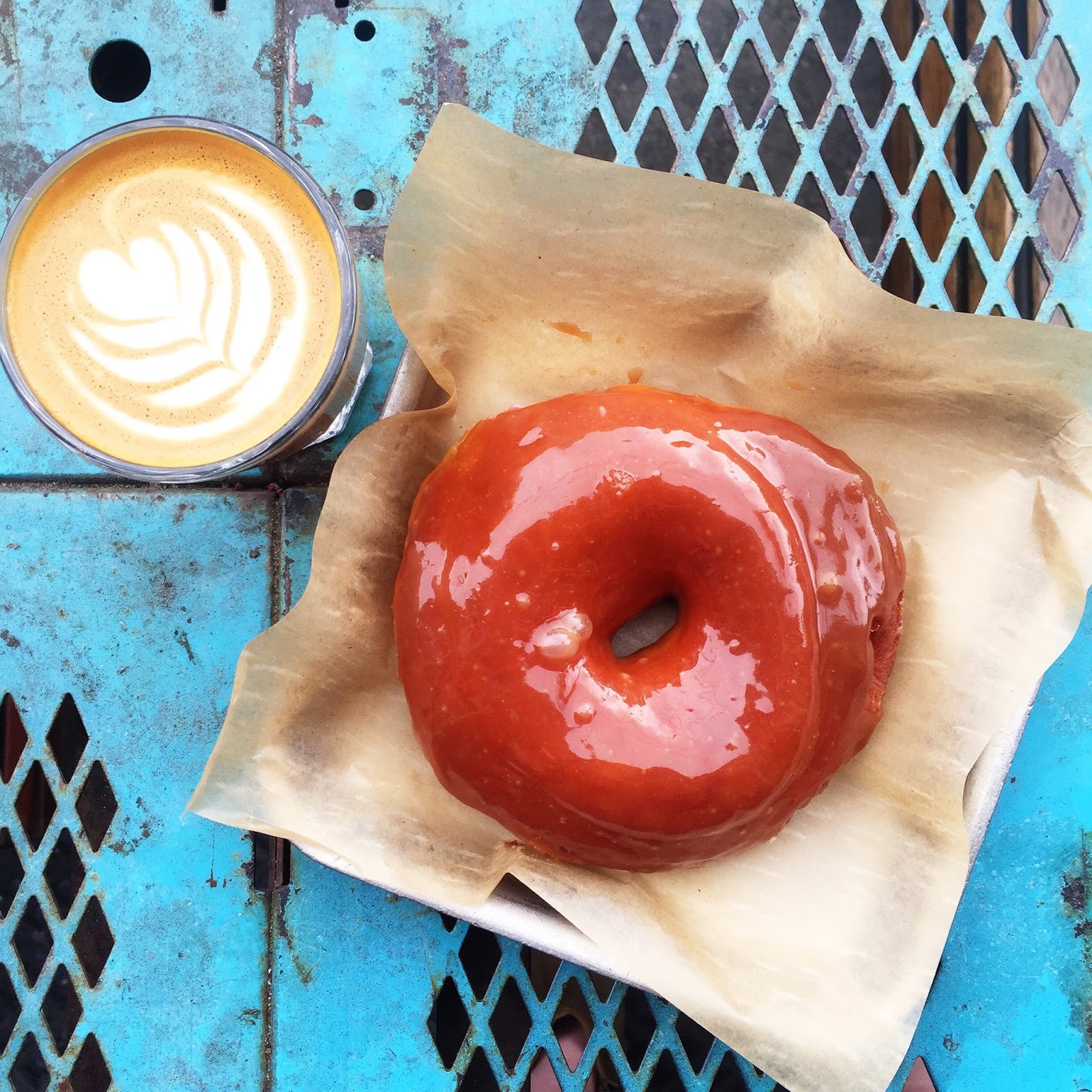 3. District Donuts – To some people these donuts would seem huge, but coming from NYC these looked quite familiar to a ton of different ones we had up there. But it is worth stopping by – the donuts were delicious. We had the salted caramel and loved it! 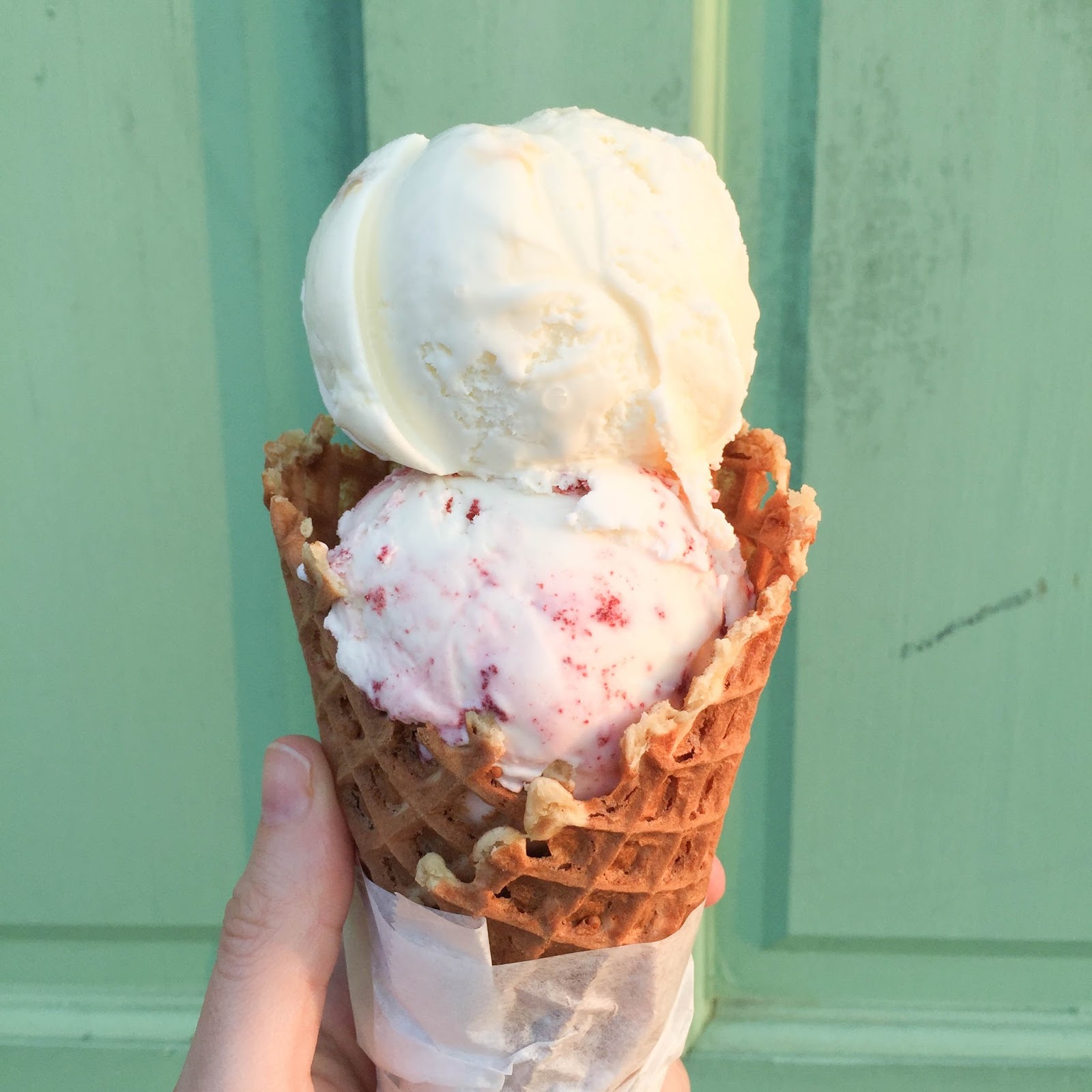 4. Creole Creamery – We were told that Jeni’s Ice Cream in Nashville was some of the best ice cream in the US, but it was nothing compared to Creole Creamery. This ice cream was rich, creamy and incredibly flavorful. And there are a ton of unique flavors to try – though my favorite was still a classic: red velvet ice cream.
5. Stein’s Market and Deli – This recommendation was all Stan since he is a huge sandwich lover. I asked him how it compared to his holy grail – Kat’z Deli and he said it was close but Kat’z still won. I got the mozzarella and tomato sandwich, while Stan had tongue. Yes, I said that right – tongue. And he said it was delicious. If you love a classic deli style sandwich with quality meats and cheese (and a super divey atmosphere), this is a must-have stop. 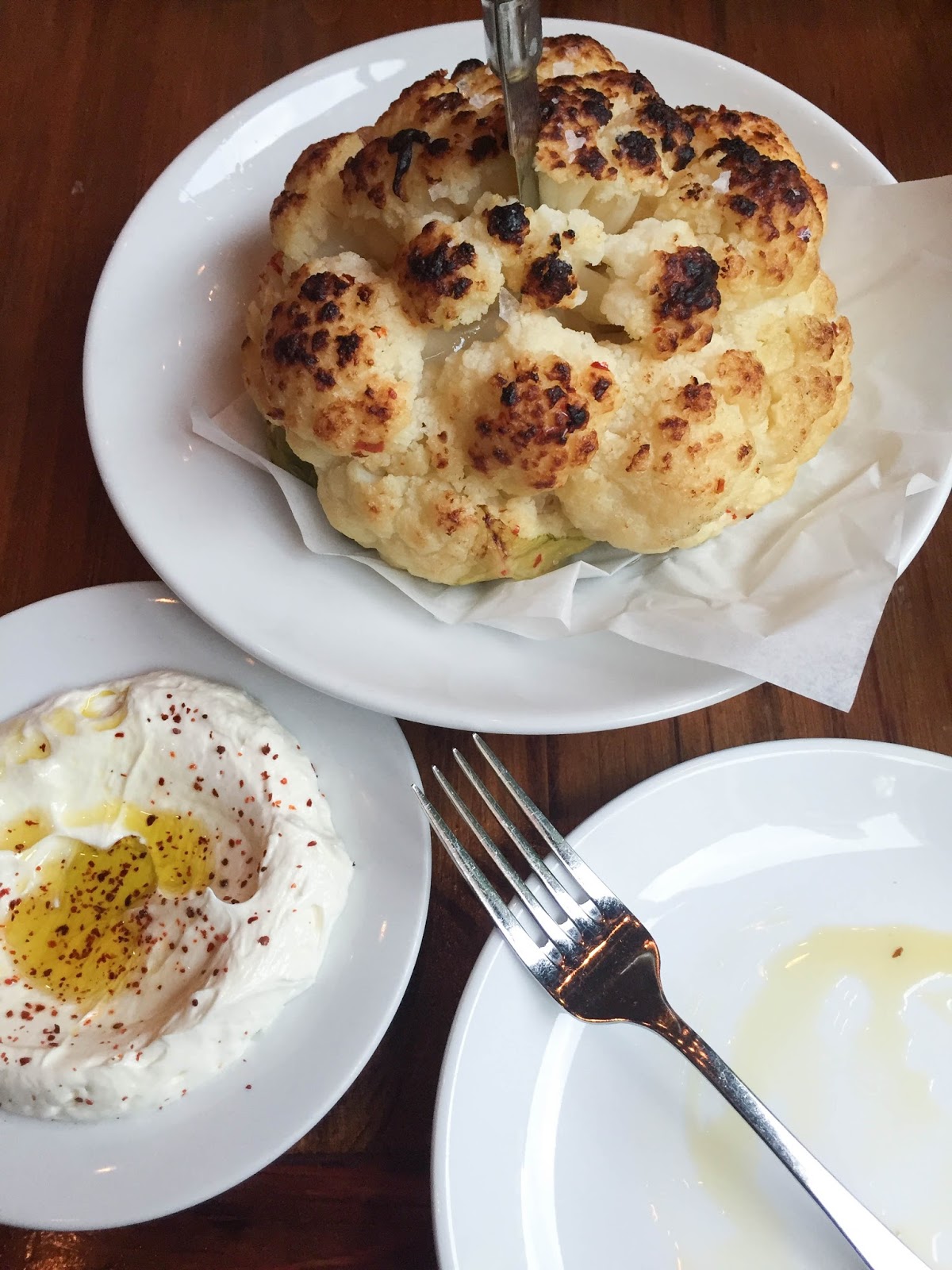 6. Domenica – To be honest, this restaurant was both a hit and miss for us. But if you go, the pizza is a must. It was delicious. Also, the cauliflower appetizer (shown above) with whipped feta was quite yummy and unique. 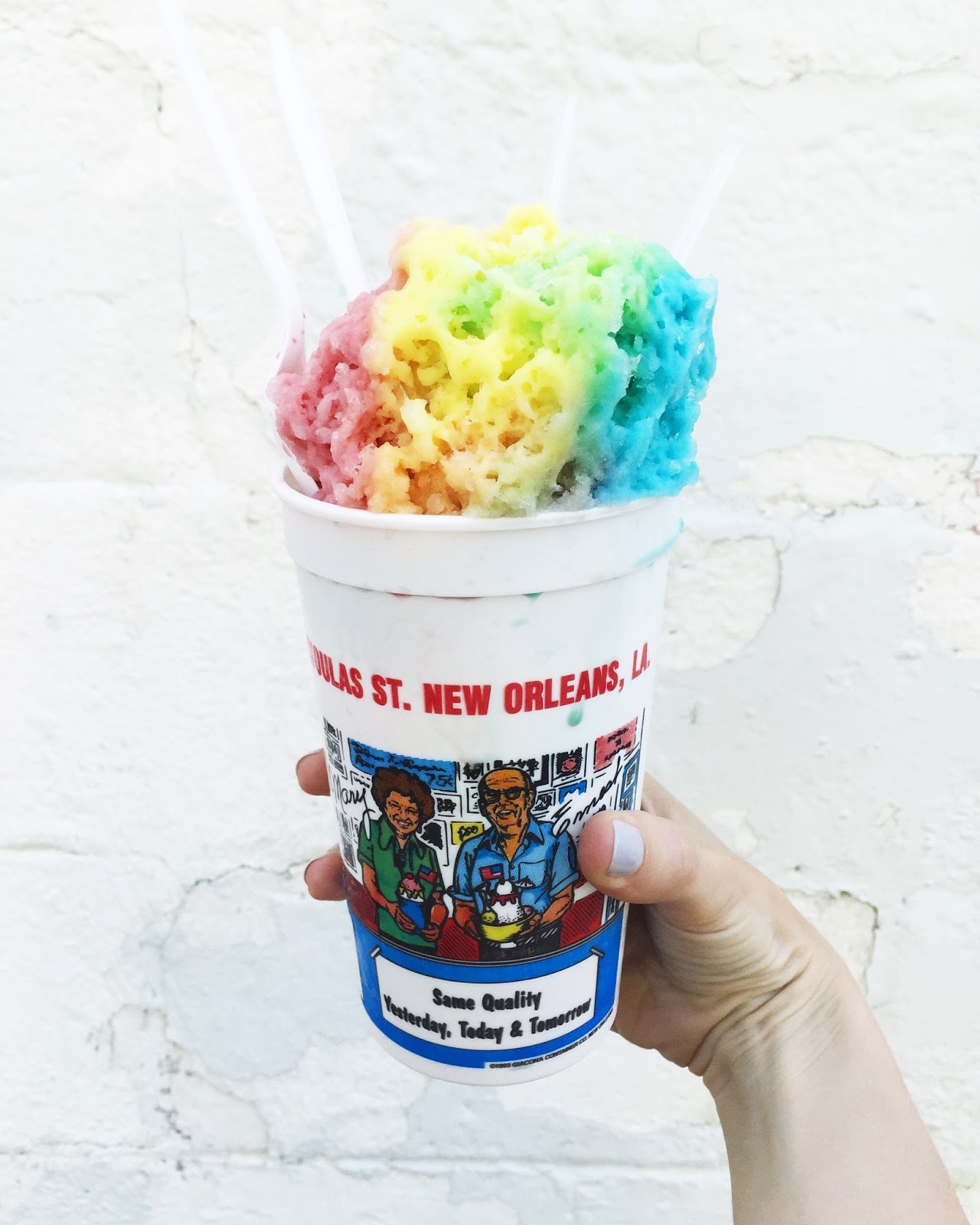 7. Hansen’s Sno-Bliz – This was a recommendation from one of my readers who lives in New Orleans. I was not excited about a snocone, but she said this was like nothing I would have ever tried before. And she was right. It’s a New Orleans institution and has a James Beard award! It’s fluffy shaved ice drizzled with homemade syrups. We had them make us a rainbow flavored one and chose the creamy flavors that were made with evaporated milk. I would truly go back to New Orleans just for this. It was a dessert I will never forget.
8. Sucre – A great place to stop for coffee or dessert. We only had coffee here, but the gelato looked amazing. 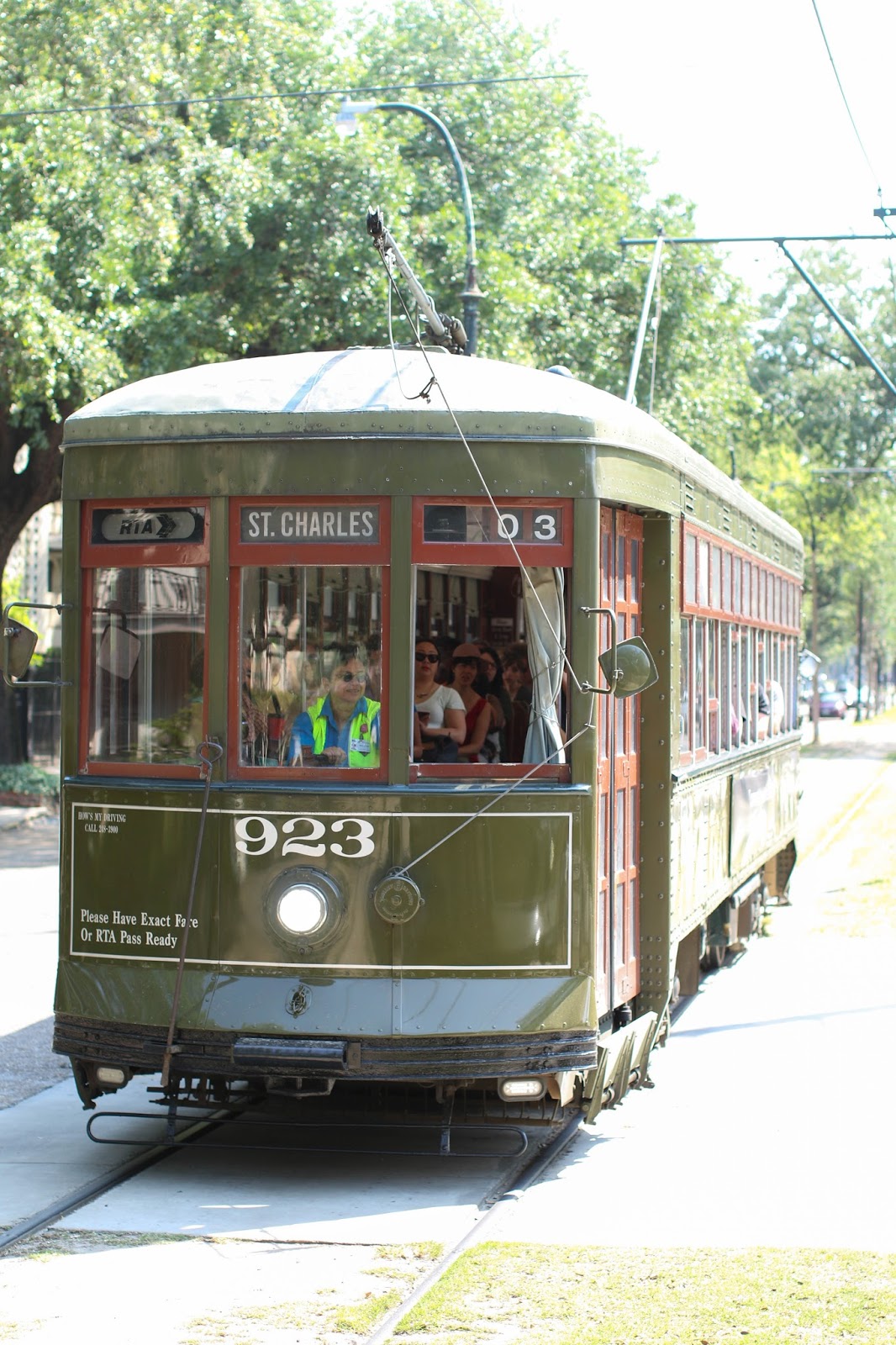 A few tips to note:

Stay tuned for my Savannah travel diary that I will have up later this week! 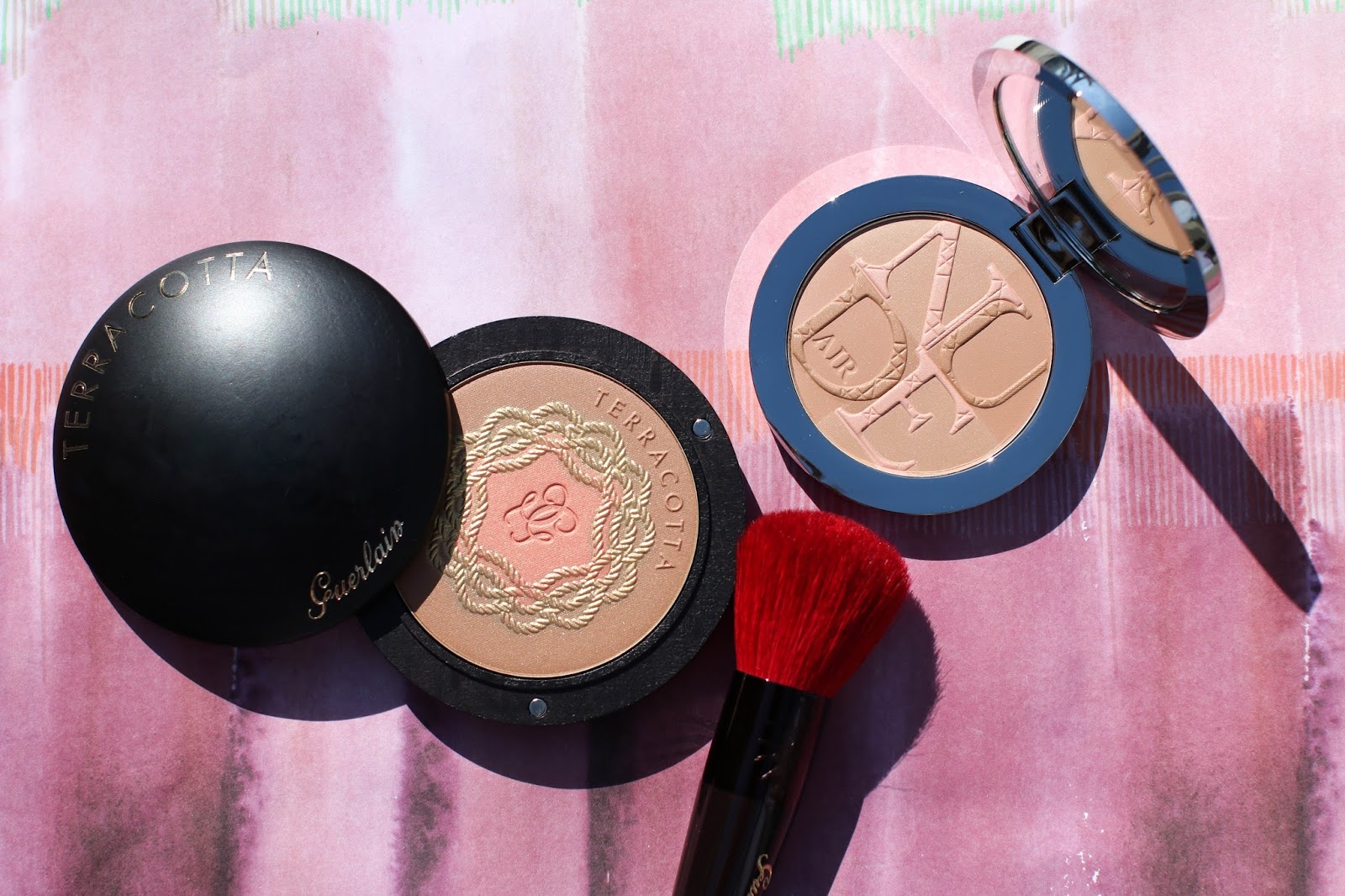 The Two Luxury Bronzers You Need This Summer

It’s like looking at works of art, amiright?! Between the packaging and color of these bronzers, these are two of my favorite summer makeup items so far. 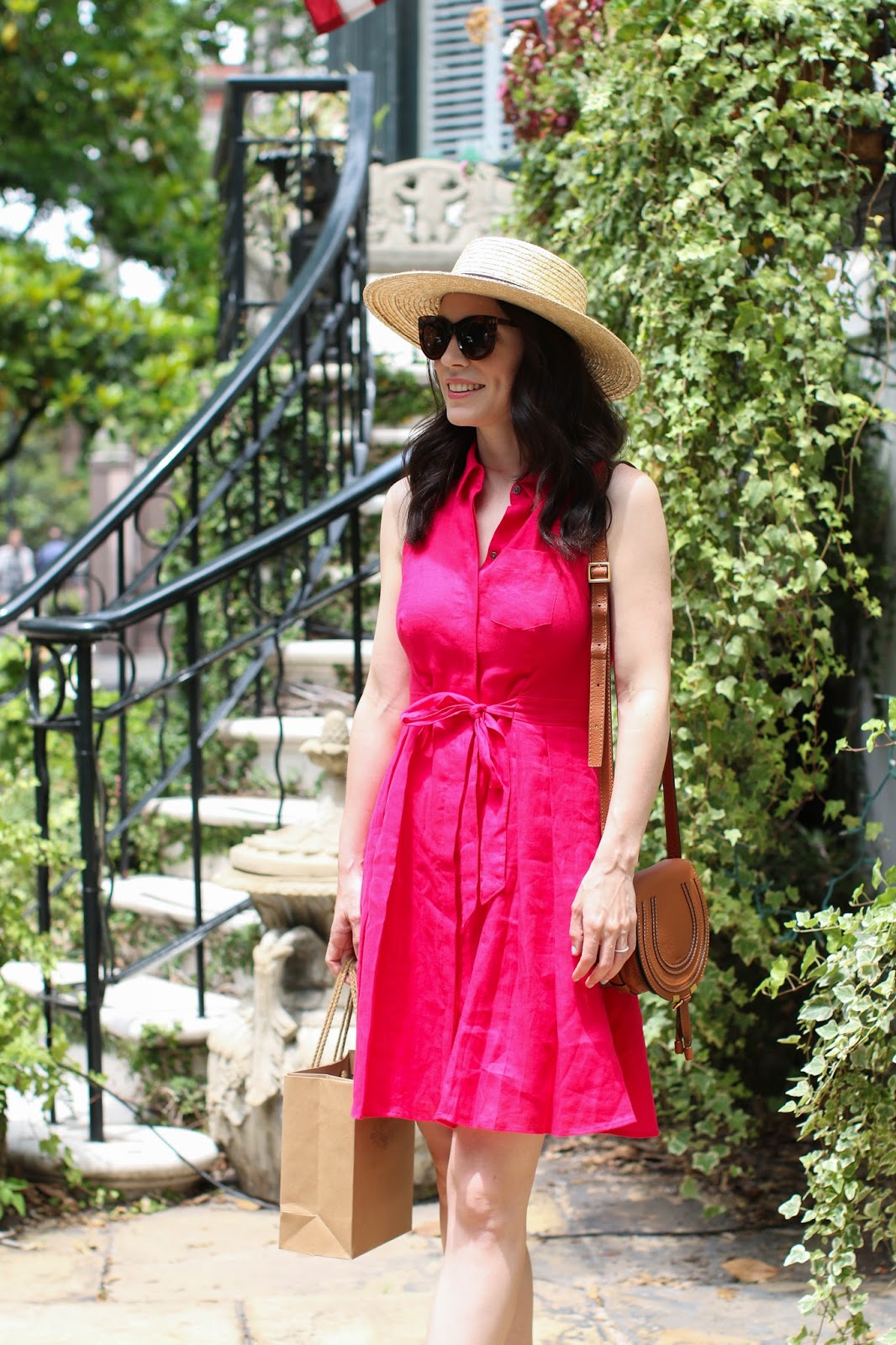 Adding Some Pink Into My Wardrobe

I’m sure if you have been following my blog for awhile you know I am not a big pink lover. Nothing against the color, but I have 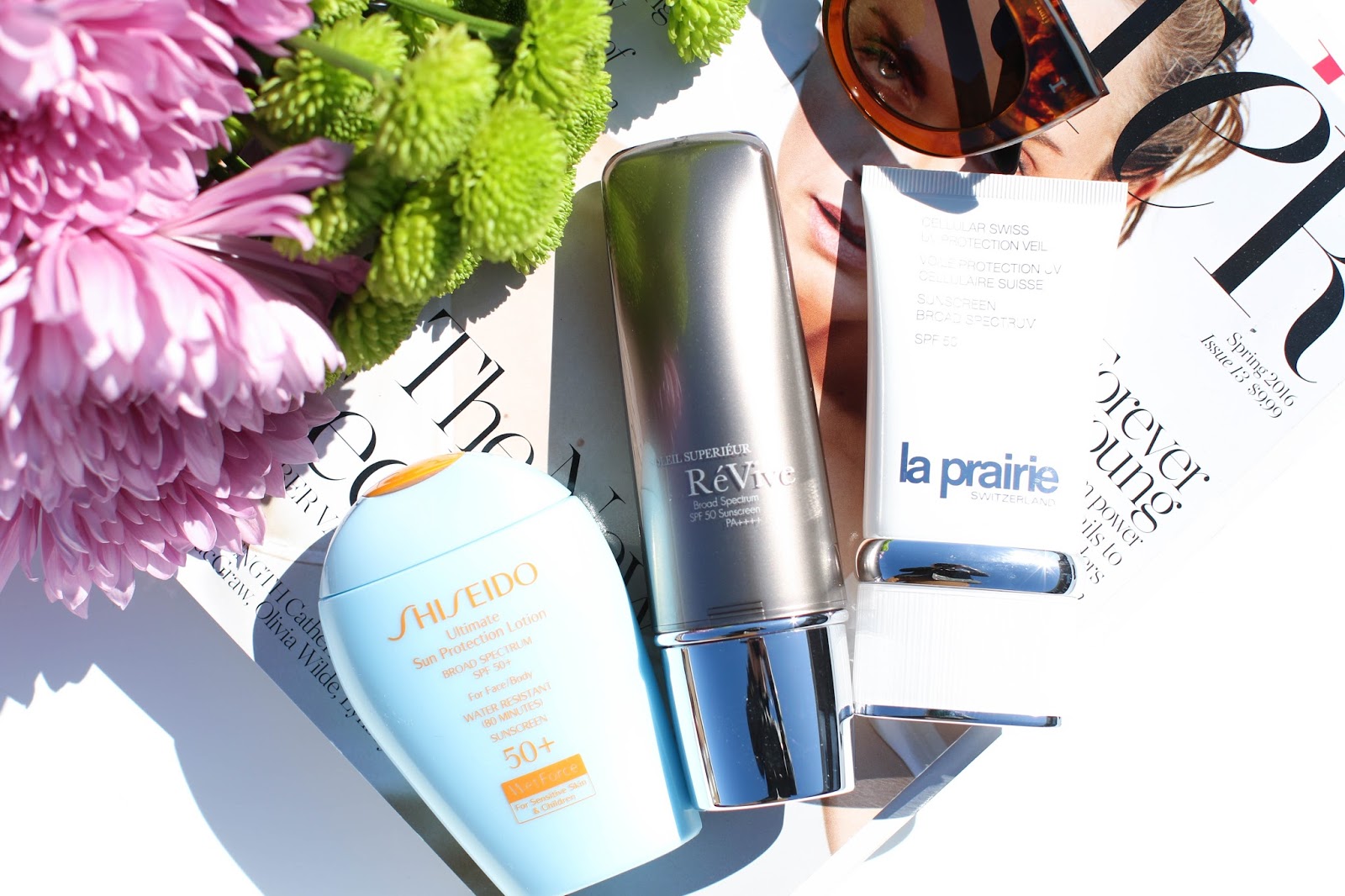 For When I Need A SPF Higher Than 30

There is not a day that goes by when I am not wearing SPF. Yes even in the winter, even when it’s cloudy and even when I 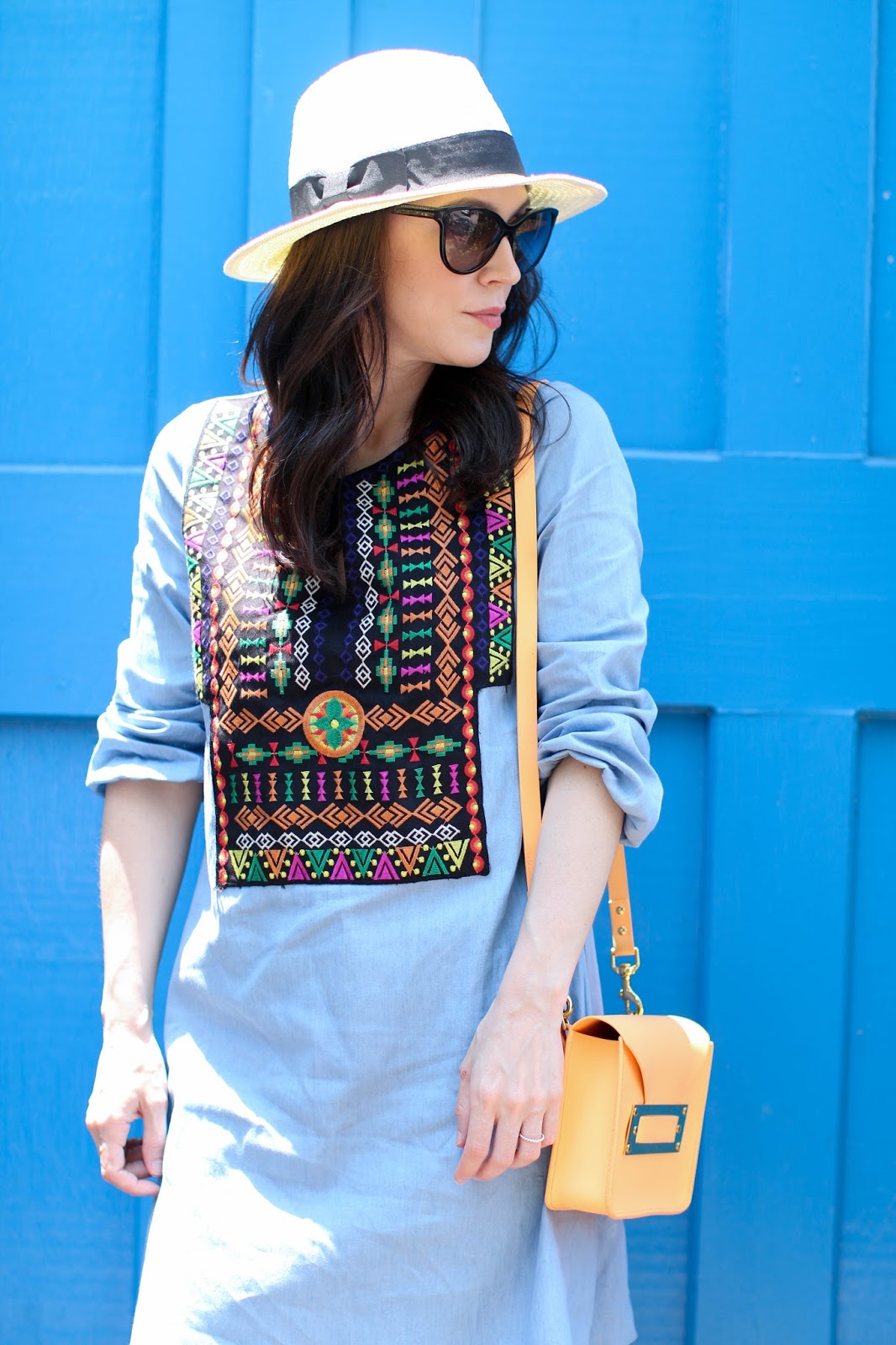 Bright Colors in the French Quarter

We are currently in Savannah, but I wanted to share some pictures of our time last week in the French Quarter. I had picked this dress specifically